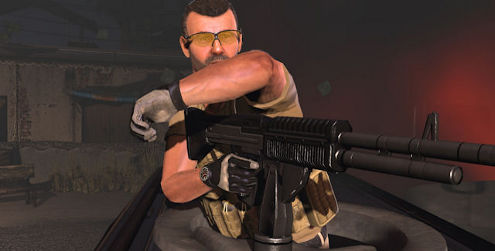 505 Gamesâ€™ Blackwater is a little too old for us to review (plus weâ€™ve already mentioned that it was one of Metacriticâ€™s worst games of 2011) but after playing through this shoddy on-rails shooter thereâ€™s no way we couldnâ€™t write a little something about it.

Itâ€™s one of those rare games thatâ€™s so bad itâ€™s good. That’s providing you play it with a joypad at least – the Kinect controls are so sluggish that we gave up with them after dying several times on the first level.

The cut-scenes raised the most grins. During one a solider is trying to break down a door but to no avail. â€œWe need to look for another way to get to the rooftop,â€ he says while retreating, even though the window next to the door is wide open. When the band of soldiers finally reach the roof they find that all four adjacent buildings have patrols on. The guys from Blackwater then stand around deliberating their next move while the enemy is no less than a hundred feet away, seemingly frozen on the spot and unable to attack.

In another cut-scene the main character’s voice couldn’t be heard. The next thing we did hear was a team-mate saying â€œThanks, receiving you loud and clear.â€

The dialogue itself is really is quite ‘special’:

“Well, the hotel downtown is giving off thermal readings that are off the chart.”

Itâ€™s a hotel. Itâ€™s a place where people gather. Of course thereâ€™s a high thermal reading.

The Blackwater brigade have exceptionally good manners for a gang of paid mercenaries as well. There are no swear words at all despite it being a 16+ rated game and just about every sentence ends with â€˜pleaseâ€™ or â€˜thanksâ€™. An attempt to boost the companyâ€™s image, perhaps? We like good manners as much as the next person, but in a game of this ilk they make every conversation seem oddly formal:

“Thank you! I appreciate it!”

It gets worse. The controls are inverted by default, so when the QTE event prompts appear on the screen you actually have to do the opposite of whatâ€™s shown. How did something like that mange to escape the play testerâ€™s attention? Grenades more often than not fail to kill an enemy even if theyâ€™re right next to the blast and sometimes enemies charge at you running at least a hundred miles per hour. It’s like watching a DVD on fast forward.

The achievements have had the same amount of thought put into them as the rest of the game. Namely, none. A little trivial perhaps, but our Gamerscrore after spending four hours with the game stood at a mere 280G. To get the rest of the achievements weâ€™d wager youâ€™d have to play it for at least 15 hours, which is a figure that beggars belief given the tedious nature. There are also couple of achievements for playing the eight player mode. How many people regularly have eight friends in their presence? I don’t think I could even fit that amount of people into my gaming room.

When this one drops to a fiver, which probably wonâ€™t be too long seeing as it is Â£9.98 at GAME at the moment, buy it, get your mates round and prepare to titter. We havenâ€™t found a person yet who doesnâ€™t like having a laugh at how poor a game is, and this is one of the poorest this generation.