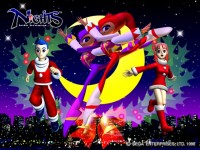 Hereâ€™s a little story for you. When Sega originally revealed Christmas Nights they announced that it would only be available as a freebie to those who purchased certain Sega Saturn games. With my only source of income at the time being a paper-round, there was no way Iâ€™d be able to save up to get it before the offer ended. Skip forward a few months, and somebody had sold a copy to my local Cash Converters which theyâ€™d priced up at Â£10. I made the purchase, but then a few days later the new issue of Sega Saturn Magazine came out with Christmas Nights stuck to the cover. Â£10 was almost a weekâ€™s wage for me back then so I did what any cheeky teenager would do â€“ I went back to Cash Converters and made some excuse that it didnâ€™t work, before heading to the newsagents to buy a copy of SSM. Iâ€™m not entirely sure what I spent the rest of my refund on, but it was more than likely sweets and crisps.

Nights was, for the uninformed, a game that defied all classification. A sort of side scrolling racing game with platform elements, perhaps. The idea was to fly along pre-determined paths collecting glowing orbs and deposit them inside a pod before the time ran out, with each path looping back to the start. When you had deposited enough orbs a new path would open up and youâ€™d be rated on your speed and agility. You could also free roam around and explore the levels playing as either Elliot or Claris, although there wasnâ€™t much to do other than hatch the eggs belonging to the AI life-forms that dwelt within the 3D environments.

You could tell that Sega designed the game with the Saturn’s strengths in mind – a lot of the objects were 2D and as the Saturn was able to shift 2D stuff around like nobody’s business, it moved like greased lightening and frequently looked beautiful.

Christmas Nights only contained one level – a Christmas-themed rendition of Spring Valley, complete with holly wreaths, sleigh bells and the occasional appearance by Santa in the background â€“ but there was an awful lot of replay value. Every time you finished a play-through there was the chance to unlock new items by playing a card matching mini-game. These ranged from a karaoke mode to the ability to play as a certain hedgehog. It also had a plot, involving a quest to find a missing Christmas tree star, and an end of level boss â€“ a colourful dragon wearing a Christmas hat, who had to be slammed into the ground.

Sega must have put a little bit of money into it â€“ the cut-scenes for the intro and ending featured hand-drawn artwork while the ending credits had a vocal score.

Play the game at any other time of the year and youâ€™d be treated to Nights: Limited Edition instead, with all the festive features removed. Playing it on 1st April also gave the chance to play as Nightâ€™s nemeses. You could change the Saturnâ€™s clock if you were feeling impatient.

Best magazine freebie ever? Itâ€™s certainly up there with the infamous DC-UK cheat disk that allowed imports to be played on Dreamcast.