There are still plenty of shopping days left until Christmas but the publishers seemingly arenâ€™t aware of this â€“ just four games are out this week. 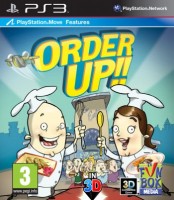 Just Dance 3 hits PlayStation 3 belatedly which should help it shoot even higher up the chart. It requires the PS Move and as such we wouldnâ€™t be surprised if it was the best selling PS Move title this winter.

Order Up!! on 3DS and PlayStation 3 isnâ€™t a new game â€“ it was first released on Wii not long after it launched. It wasnâ€™t bad at all but it didnâ€™t sell as well as it deserved to. A rare second chance, then.

If you have kids that are a little too young to grasp Mario Kart Wii then Pocoyo Racing might be a decent first stepping stone. Itâ€™s Â£17.99 on Play with a racing wheel.

Then thereâ€™s Just Sing Volume 2 on DS. A video and track listing can be found on the publisherâ€™s site. A karaoke game for the DS does sound rather anti-social, doesnâ€™t it?

Next week: Weâ€™re struggling to find anything. In fact, Star Wars: The Old Republic on PC (out 20th December) could very well be this yearâ€™s last release.