Usually once a month we carefully hand-select a vintage videogame magazine from our extensive collection and give it a going over, but with Christmas upon us this month weâ€™re instead looking at something different. That something is Grandreamâ€™s Official Sonic the Hedgehog Yearbook from 1992. 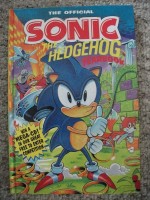 As a youth, the Beano and Dandy Christmas annuals would take me hours to read through. I can remember being disappointed with this annual as I finished it in next to no time at all. A bit like Sonic 2, then.

Between the hardback covers were three Sonic comic strips, one rather sanitised Shinobi strip, an embarrassingly poor interview with Sonic himself and a rather out of place news section. The Sonic strips were drawn and written by different writers so they were rather inconsistent quality. The first started off with Robotnik watching a Tom and Jerry-style cartoon and then copying ideas from it. Cue Robotnik painting a fake tunnel on the side of a mountain. The second strip was set in Spring Yard Zone and saw Robotnik in his blimp chasing Sonic through the level. Eventually Robotnik built up so much speed that he vanished off the edge of the page. The final strip didn’t buck the trend for stupid ideas â€“ here Sonic fooled Robotnik with a wooden cut-out and then attacked him from behind, before freeing his chums who have been locked in a shed. Just like in the game! 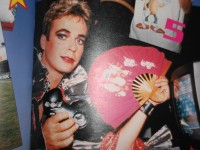 There was a quiz about half way through the book, which again is beyond poor. A screenshot of Tazmania on Mega Drive, with the question being â€œWhat game is this?â€ There are a few photos of â€˜90s celebrities too which the reader was tasked with identifying. The photo of Julian Clary holding a Mega Drive joypad upside down is still rather amusing. There was also a photo of Andi Peters playing Ecco the Dolphin and one of Graham Gooch holding a Game Gear above a set of cricket wickets.

Towards the end of the book was a review section â€“ Sonic 2, Sherlock Holmes, Wolfchild, The Flintstones and Jaguar XJ220 were given a quick going over. The reviewer described the sound in The Flintstones as being â€œfunâ€. Also: the reviewer claimed that when playing Sonic 2 in two-player, players compete to see who can get the most points.

The news section meanwhile contained a look at the then newly redesigned Mega Drive II and a piece confirming that Street Fighter II was coming to Mega Drive. The Master System didnâ€™t get a single mention at all. There was though a competition to win a Mega CD, with a closing date of 28th February 1994 â€“ more than a year after the book was released.

At least the Shinobi comic was nicely drawn, even if the story was as thin as the paper it was printed on. Joe Musashi broke into a building, had a fight with another ninja and then walked off into the distance victorious.

It could have been worse, I suppose. I could have received the Official 1992 Neighbours Annual for Christmas instead.