The last week has been a bit quiet for the various app stores, although Infinity Blade II, the sequel to the massively successful original, was a fairly noteworthy release. We haven’t bothered reviewing that though, as we’d probably just write “it’s almost exactly the same as the original, only better”. I suppose you could call that our review then.

A new release for Android at least, although the iPhone version came out last year, with the Dreamcast original now twelve years old. Jake actually covered ChuChu Rocket earlier this year, where he grumbled a bit that it wasn’t free like the Dreamcast version. It’s hard to complain at 69p though.

We may have reviewed ChuChu Rocket more than any other game on this site, come to think of it (on the Dreamcast, Game Boy Advance, iPhone, and now Android, if you’re interested). So for that reason, long live ChuChu Rocket! 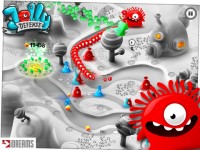 Possibly one of the most overdone genres on the iPhone, this tower defense game does at least exude buckets of charm and simple yet beautiful graphics. The limitations on placing your towers make it a little more strategic than simply building a vast array of giant lasers. Even when the action gets quite hectic, with your base about to be overrun by bouncing jelly blobs, it still all feels quite calm and relaxing. That’s both a strength and weakness of the game – it’s thoroughly likeable, yet doesn’t always manage to suck you in.

Another bit of self-promotion here, as one of the GA writers (this one) worked on the graphic and interface design. It’s still rather good on its own merits though, a deceptively simple game where you stop and start the traffic lights, to either flow the traffic through or cause big collisions, earning credits to unlock better and more explosive vehicles.

Matt said it was a bit like Burnout Crash for iPhone, which isn’t totally inaccurate, although it plays completely differently (you’re not driving a car, for starters). It’s out now on iOS, with the Android version following in the next week.