The home consoles did very well for themselves last week, with dozens of new renditions of big name franchises making an appearance. This week itâ€™s the DS and 3DS that get to shine.

Professor Layton and the Spectre’s Call is this winterâ€™s big DS offering from Nintendo. Us Europeans however aren’t quite getting the full package â€“ Nintendo has removed a reportedly 100+ hour RPG mode that was present in the US version. Nintendo explained that if they were to translate it into the half-a-dozen European languages that there are then they wouldnâ€™t have been able to release it this year. Even without it though reviews have been strong. NGamer gave it 83% although they did suggest playing the other ones first if you havenâ€™t as Spectre’s Call explains Professor Laytonâ€™s beginnings.

Doctor Lautrec and The Forgotten Knights is a very similar offering from Konami, out on 3DS this week. NGamer said it does an awful lot, but it fails to do any of it well. It walked away with a 56% review score.

NGamer also reviewed Sonic Generations on 3DS. Not quite as good as the console version, it would seem, but still very good. They dished out 79% calling it â€œgood-looking and fan-pleasingâ€. The 3DS also sees the releases of Frogger 3D, Imagine Fashion Designer, Horrid Henry: The Good, The Bad and The Bugly, Happy Feet Two, F1 2011, Cooking Mama 4, James Noir’s Hollywood Crimes, Mahjong 3DS: Warriors of the Emperor and Namco’s RPG Tales of the Abyss. Weâ€™d wager that out of those F1 2011, Cooking Mama 4 and Tales of the Abyss are worth a look. 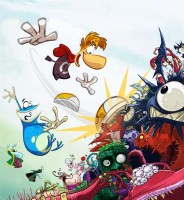 We did though play the demo of Happy Feet Two on Xbox 360 and it wasnâ€™t quite as terrible as we feared. But should you buy it over the glorious looking Rayman Origins? No, of course not. Itâ€™s out on PlayStation 3, Xbox 360 and Wii this week with reviews mostly 8s and 9s. Try the demo if youâ€™re curious – it has a generous amount of levels to explore.

WWE ’12 and The Lord of the Rings: War in the North are this weekâ€™s other big console releases. WWE â€™12 was given a lot of love from IGN: â€œWhat THQ has done here serves its audience spectacularly. WWE ’12 retains and improves upon the already-great presentation of its predecessors, capturing a likeness of wrestling that is uncanny. And it plays just as well as it looks. This should be considered a milestone for the wrestling simulation genre. It’s certainly a much-needed breath of fresh air.â€ They handed it a 9.0. Games Radar was also positive about it smacking an 8 down.

The Official Xbox Magazine US awarded The Lord of the Rings: War in the North a 7.5: â€œWar in the North is hardly the most memorable adventure through Middle-earth, but you wonâ€™t regret any of the time you spend fighting across its grim battlegrounds.â€

Just like the two above, King of Fighters XIII â€“ out on PlayStation 3 and Xbox 360 â€“ is an acquired taste. 360 Gamer magazine reviewed it this month and gave it an 8. The Official Xbox Magazine said it may be a overwhelming for new fans and gave it 8.5.

Last week the world received Dreamworks Super Star Kartz; this week we get Ben 10 Galactic Racing. The DS version scored 51% in NGamer. â€œGalactic Racing is alrightâ€ they said. Itâ€™s probably safe to assume that quote goes for the PlayStation 3, Xbox 360 and Wii versions too.

Winter Stars, out on PlayStation 3, Xbox 360 and Wii, has been designed for use with the PS Move, Kinect and Balance Board respectively. The Official Xbox Magazine US liked the fact it has a story mode linking all the events together, and said that the career mode is lengthy. They gave the pretty snowscapes a thumbs up too.

Then thereâ€™s Puma After Hours Athletes for PS Move. Itâ€™s not about what two people do when they love each other very much, but rather a collection of â€˜late nightâ€™ sporting events. Darts, bowling and pool, to be precise. Like most PS Move games, it’s available online for a purse pleasing price.