The 3DS hasnâ€™t had a very smooth start and in fairness Ubisoft can be held partly responsible. Ghost Recon: Shadow Wars aside, their 3DS games have been very lazily made and although we can excuse the launch games like Rayman 3D, Asphalt 3D and Splinter Cell 3D for having frame rate problems and being generally unimpressive, we canâ€™t excuse that even their second batch of titles also suffer from shoddiness. Did you know Driver: Renegade 3D features recycled elements from 2009â€™s COP: The Recruit on DS? Well, you do now. 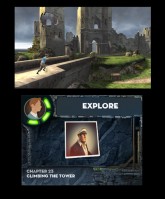 The good news is that thereâ€™s no DS version of this movie tie-in so Ubisoft hasnâ€™t been able to simply convert it with a few 3D bells and whistles. Instead theyâ€™ve crammed the console version onto the system and added a few sections that use the stylus. The downside of this is that it inherits all the faults of the bigger console versions, with those faults being an overall lack of challenge for experienced gamers and the fact that it can be beaten within an afternoon.

Platform sections that feel very much like the original 2D Prince of Persia make up the bulk of the game, with puzzles frequent. They arenâ€™t particularly taxing though â€“ throwing burning torches to cut ropes, pushing boxes onto switches and so forth. TinTin also has to get his feet wet a couple of times and swim through some underwater mazes, while occasionally Snowy gets a chance to shine by crawling though small spaces and digging holes. 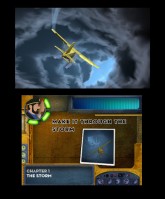 Combat is nicely done and rather amusing. Itâ€™s of the slapstick variety â€“ banana skins can be thrown in front of enemies to make them skid into walls and TinTin can hide in barrels and whack enemies over the head with the barrel lid. Animation is very slick with some nice touches here and there. Even though heâ€™s a mere child TinTin can also punch his way to victory. Quite how heâ€™s able to take on three men at once and come out still alive is beyond us.

The stylus sections give you the chance to use your stylus as a cutlass â€“ Captain Haddock has flashbacks from his ancestorâ€™s past, who just happened to be a pirate. These sections offer a change of pace from the 2D platforming but they are a little fiddly. When sword fighting the stylus has to be swiped across the screen to attack and tapped to parry but often you end up doing the opposite of what you intended.

A mini-game involving a battle at sea fares better â€“ cannon balls have to be loaded into a cannon and then fired when the enemy is within range. Better still is the airplane dog-fighting section towards the end of the game which is a free-roaming affair. Ubisoft should have put another one of these in â€“ itâ€™s a lot more involving than the two on-rails aeroplane sections present. 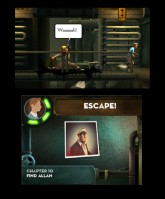 Replay value comes from the treasure chests hidden in each level â€“ only those who explore the occasionally atmospheric environments will find them all on their first play. Thereâ€™s also a two player mode that can be played locally and the chance to swap time records via StreetPass. This is the first 3DS game weâ€™ve been able to finish without turning the 3D effect off. The illusion of depth is quite remarkable in places â€“ for a moment while exploring a posh mansion we almost thought we were staring at a tiny dollâ€™s house inside our handheld.

A straight forward nature makes it hard to recommend to those who have been playing games for years, but while it lasts itâ€™s quite a fun game. Certainly one to consider once the price drops.