Itâ€™s another good week for gamers. Thatâ€™s providing you have healthy bank balance, at least â€“ there are half a dozen big name titles out this week. 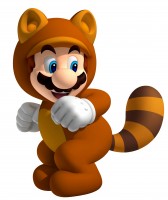 The old-age question if whether Mario can blow stripy balloons up with his arse has finally been answered. As the image to the right shows, he can indeed. We can also tell you that Super Mario 3D Land has been worth the wait. Scores so far include an 8 from EDGE and a 9 from Eurogamer. NGamer said itâ€™s trying a little too hard to be â€œall things to all peopleâ€ â€“ â€œtoo throwaway for the Galaxy crowd and too soft for the New Super Mario Bros. Wii lotâ€. They still gave it 90% though.

And whatâ€™s this? Another big game from Nintendo? Amazingly, yes. The Legend of Zelda: Skyward Sword reinvents the franchise and then some. It doesnâ€™t even feature Gannon as the last boss. We hope that doesnâ€™t count as a spoiler. Praise has been universal, with a few even calling it the best Zelda yet. EDGE has given it a 10; NGamer handed out 98%.

Mario & Sonic at the London 2012 Olympic Games is another that NGamer reviewed this month. They gave the Wii version 84% – â€œAs far as party games go, this is gold standardâ€. The 3DS version isnâ€™t due out until next year.

Halo: Combat Evolved Anniversary is one that weâ€™ve reviewed ourselves and very much enjoyed. Amazon are selling it for Â£27, as are Tesco.

The last Need for Speed was heavily hyped as the developers behind Burnout were at the helm. Need for Speed: The Run hasnâ€™t had the same attention from the press. Games Radar gave it an 8 even though they found it a little short and to have some unfair difficulty spikes. On the flipside Eurogamer really didn’t like it very much, giving it a 5. The PlayStation 3 version contains vehicles not found in the Xbox 360 version, while the 3DS version should be worth a look â€“ itâ€™s from the guys behind Trackmania on Wii and DS, which were well received.

Assassinâ€™s Creed: Revelations doesnâ€™t quite live up to its name it would seem. Thatâ€™s to say, it isnâ€™t a revelation. EDGE has given it a 7, as has Eurogamer, but there has been a few 8/10 scores. If you arenâ€™t expecting anything more than more of the same, then you wonâ€™t be disappointed.

The big names keep coming. Saints Row: The Third has had some heavy promotion which has already paid off â€“ pre-orders are four times higher than Saints Row 2. Games Radar handed out a perfect 10 but CVG wasnâ€™t quite so positive, giving it a 7. “Some amazing moments… and some truly abysmal ones. Saints Row: The Third is wildly imaginative and frequently entertaining, but a lack of technical polish and weak combat overshadow its achievements.”

Activision are unleashing four games onto the public as well â€“ the Xbox 360-exclusive Rapala Kinect Fishing, Cabela’s Adventure Camp (for the kids), Cabela’s Survival: Shadows of Katmai (for the adults) and DreamWorks Super Star Kartz (for people who really canâ€™t wait until Mario Kart 7). All of these are budget games â€“ the two Cabela titles can be found for Â£25 online while Super Star Kartz is a mere Â£14.99 on Play. Play says that Rapala Kinect Fishing comes with a rod, but Amazon doesnâ€™t mention this. Thereâ€™s a chance Play are mistaken.

While those games above may be of questionable quality we least we can count on LEGO Harry Potter: Years 5-7 being good. Itâ€™s out on just about everything â€“ PlayStation 3, Xbox 360, PSP, Wii, DS, 3DS and PC.

Lastly, THQ are releasing their uDraw tablet on Xbox 360 and PlayStation 3. It comes with Instant Artist and two other games are being launched alongside it – Marvel Super Hero Squad Comic Combat and Pictionary Ultimate Edition. Marvel Super Hero Squad Comic Combat is also out on Wii this week, as is the uDraw compatible Disney Princess Enchanting Storybooks, much to the delight of pre-teen girls everywhere.