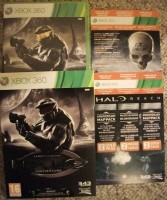 We have in our possession a retail copy of Halo: Anniversary, officially due out next Tuesday.

As mentioned on the cardboard sleeve the box contains a bonus Master Chief avatar costume and a â€˜Grunt Funeral Skullâ€™ game modifier that makes the grunts explode like a plasma grenade when activated.

Not only this, but thereâ€™s also a DLC code inside for Halo: Reach containing 6 classic maps, a new Firefight mission and a 2 day gold pass.

A quick look online reveals that only Play mentions these goodies, which are being offered as a pre-order incentive. Our copy wasnâ€™t pre-ordered though â€“ we obtained it early as somebody at certain supermarket (Tesco) accidentally put copies out earlier today.

This should mean that everybody who purchases the first batch of copies will get the bonus DLC. There’s no reason that shouldn’t be the case, at least.