This week is all about Skyrim really. A few of you might still be interested in some mobile gaming though. Perhaps to keep you occupied whilst on the bus to your local games store or sitting near the mail box. Adam has been admiring Bike Baron and mulling over Atari’s use of the Asteroid’s license, whilst Matt slices Activision’s Prototype advert/game and Jake praises something. Hallelujah!

The best mobile games generally make use of simple touching and tapping controls, or dragging and swiping across the screen. On screen virtual control pads generally aren’t the greatest solution ever, but Bike Baron manages to stick a handful of virtual buttons on the screen, and still remains impressively playable. The game itself is basically an advanced Excitebike though (accelerating and tilting your bike back and forward), so the controls needn’t be particularly complex.

The polish is pretty strong in this one. Everything about Bike Baron looks lovely, even the menu and credit screens ooze brilliance, and the Baron’s lovely ginger cat adds a bag of charm to the proceedings. It does border on being a little too simple and easy, but that doesn’t stop it being fun and thoroughly entertaining.

Slice SD is highly regarded by mobile gamers, beaming away on the App Store with a 5/5 review score. Quality comes with a price in this instance though â€“ it costs Â£1.49. Fortunately Activision has provided a solution for the thrifty out there â€“ a free version, renamed ProtoSlice. The catch? Itâ€™s filled with shameless adverts for the upcoming Prototype 2.

The Prototype franchise fits in surprisingly well. The knives that you had to carefully pull back with your fingers in Slice HD have been replaced with blades belonging to the disfigured lead character of Prototype 2. As the developers themselves describe it, this is Twister meets Friday 13th â€“ sometimes you need to have more than two fingers on the screen to gently slide away more than one blade at once. If one of your fingers slips, even slightly, the blade springs back into place, spilling virtual blood all over the screen.

Youâ€™ll occasionally swear blind that you never let go, but the fact that you always come back for more proves how addictive this game can be.

With a recent update bringing a new pack of ever more elaborate levels, it’s a good opportunity to sing the praises of Contre Jour.

It’s easy to draw comparisons to other physics puzzlers – chiefly Cut The Rope – but it’s executed in a uniquely satisfying way. The landscape can be shaped by your finger, making it a very malleable, tactile experience. The refreshingly refined colour palette adds to the feeling that it’s a world you’re playing with, rather than a string of isolated one-screen puzzles.

The level design is pleasingly varied, mixing relatively simple reaction tests amongst more cerebral fodder, while other levels only unfurl with a little trial and error. Each new toy – tentacles, blowers, portals, slingshots – opens up new possibilities, but without displacing what came before. It is an utter delight. 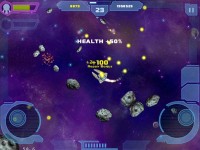 32 years since the original Asteroids, Atari are still making use of the license. If you’re a fan of the original, it’s available on the iPhone among the games in Atari’s Greatest Hits, although Asteroids: Gunner gives the concept a lick of paint and some fairly decent twin-stick controls.

It has something of the look and feel of Super Stardust HD, which gives a good first impression. It all feels rather neutered though. The basic gameplay is hard to argue with – shoot asteroids into smaller pieces, shoot even smaller pieces, collect stuff – but Asteroids: Gunner just doesn’t feel as good as it looks. It’s all a little slow, occasionally clunky, and never really gets particularly exciting. It can’t just be a limitation of the game’s heritage, as Super Stardust HD shows that such old-style shooters can still be incredibly energetic and exciting. Come on Atari, give Asteroids a proper 21st century revamp!