So, here we are â€“ the grand daddy of all videogame magazines.

The first issue arrived in newsagents back in October 1981 for 75p, complete with some Mars Attacks-style aliens on the cover. Back then the magazine was very different from the colourful, console focused, publication most remember it as being. Micro computers, such as the Spectrum ZX81, Apple II and Vic 20 were given the centre of attention and very few pages were in colour.

It’s a little known fact that back in the early days of videogame magazines writers had to photograph their TVs to capture images, but this first issue goes back to before even somebody had that idea. Reviews featured no screenshots and were instead decorated with hand drawn artwork.

Most of the magazine was made up of pages upon pages of game code intended for budding coders to use to make their games. The first issue offered versions of Space Invaders, Hangman and Tarot that could be yours to play, after hours of typing and weeding out errors (often the writerâ€™s own).

As new computers and consoles came and went, Computer and Videogames â€“ later abbreviated to CVG â€“ evolved with the times. This is something it did very well. When Julian Rignall took control in 1988 we saw arcade games and imports taking pride of place, while the letters page was hosted by Mean Yob – a rather crude and snappy imaginary individual. Even though the then new and exciting Mega Drive and SNES were upon us the writers made sure that older formats still had plenty of coverage. 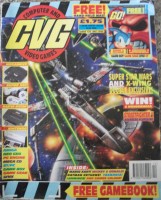 When the handheld market took off in 1991, with the Lynx, Game Boy and Game Gear battling it out, a pull out handheld magazine named GO! was included with every issue and was a staple feature for a number of years. Even though the PC Engine GT wasnâ€™t available in Europe, it too was covered in GO!

Over the years as editors came and went, the magazine saw several revamps. Itâ€™s the late â€˜90s issues that most gamers have fond memories of. The jump from 16-bit to 32-bit saw the type of transition that weâ€™re unlikely to ever see again, and CVG was the forefront for news of all the shiny new systems due to release.

The late â€˜90s saw the magazine ditch using percentages for review scores and started giving scores out of five. It also came with a Freeplay section, printed on rather cheap feeling yellow paper which contained a page of retro reviews, a rumour round-up, readerâ€™s high scores and a drawings section entitled â€˜Drawinz wot you dunâ€™. Cartoon dog Hunter governed this page – bad pictures were awarded a picture of a stinky turd; good pictures were awarded bones.

Itâ€™s during this era that the writers’ enthusiasm genuinely shined. The likes of Paul Davies and Ed Lomas were so excited about Tekken 3 that it appeared on the cover no less than three times.

But pride always comes before a fall. The start of the millennium saw the magazine change publishers, who wanted their newly acquired magazine to appeal to a larger audience. Content was watered down and dross such as Def Jam Vendetta started appearing on the cover. Gamers flocked to forums to vent their rage and sales dropped swiftly.

Future Publishing then picked up the pieces but rather than revive the magazine it was culled in 2004 and subscribers were sent issues of GamesMaster instead. Did Future kill CVG off to help boost sales of GamesMaster? Itâ€™s possible, but more likely they wanted access to the computerandvideogames.com domain name, which Future now uses as a hub for all their videogame related content.

CVG does live on in print. Well, just about â€“ the likes of Futureâ€™s Xbox World feature CVG logos on their covers, prompting readers to check out their website.

Usually in our magazine features we pick just one issue to take a look back on, but with such a rich and varied history this month weâ€™re going to take a look at the three issues in the photos above.

With magazine sales constantly dipping itâ€™s doubtful that weâ€™ll ever see CVG brought back to its former papery glory. Most of the writers are still around though â€“ Julian Rignall writes for GamePro and is a regular on Twitter, while Paul Davies has a monthly column in Retro Gamer and often muses over the days of CVG and Mean Machines Sega.