Weâ€™ll kick off this monthâ€™s eBay round-up with Dreamcast malarkey, seeing it was 12 years ago this month that the system was released in Europe. 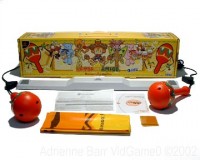 Selling for a fair old whack was a game that has only just been re-released â€“ Resident Evil: Code Veronica. It wasnâ€™t the retail version that sold for Â£124.99 though but rather a press promo copy.

A collectorâ€™s edition of the rare Japan-only shoot â€™em up Under Defeat, which came with a CD, poster and sticker, nearly broke Â£100 too, selling for Â£99.95 on Buy It Now. Two copies of Samba de Amigo went for Â£84.95 and Â£71.99 (2 bids) respectively, complete with the maracas and mat.

Usually itâ€™s the games released late in a systemâ€™s life that sell for hefty amounts in years to come. The Dreamcastâ€™s back catalogue is no different â€“ this month saw Evolution 2 sell for Â£55, Rez for Â£49.99, dull party game Sonic Shuffle for Â£39.99 and Capcomâ€™s Cannon Spike for Â£38 (7 bids). Itâ€™s a little known fact Cannon Spike stars Arthur from Ghouls & Ghosts, Cammy from Street Fighter and Mega Man.

Speaking of the blue bomber, as fanâ€™s often call him, an auction for two Mega Man SNES games ended at Â£489 (17 bids). Mega Man 7 and Mega Man X, if youâ€™re wondering. I used to own Mega Man X when it was first released. I think I traded it in for Stunt Race FX.

Also in the world of Nintendo, a rather nicely looked after Nintendo 64 collection sold for Â£929 (24 bids), which included 40 boxed games like the desirable Sin & Punishment, Banjo-Tooie, Resident Evil 2 and Paper Mario. If I were the buyer Iâ€™d be sticking that copy of Carmageddon 64 straight back on eBay. Or in the bin.

An incredibly rare Zelda III and Metroid III double pack netted one seller Â£524.42 (38 bids) while a Game & Watch LCD game sold for Â£797.77 (23 bids). Thereâ€™s a little bit of history behind the Game & Watch â€“ it was originally known as Helmet, but the distributor changed the name to Headache for the UK market thinking the word helmet was a bit too rude.

Back to Sega now. Think Virtua Racing on the Saturn was the closest to the arcade? Well about having the actual arcade cabinet in your home? Somebody with room to spare paid Â£360 for a Virtua Racing coin-op after 14 bids. A boxed copy of Tailsâ€™ Adventure on Game Gear – which we hope makes it onto the 3DS virtual console some when â€“ sold for Â£160 (29 bids), and a set of unboxed Sonic Adventure figures sold for Â£165 (4 bids).

A bundle of eight Master System games almost hit Â£200 too. The high price is down to the fact that the bundle contained Masters of Combat, a 2D fighting game that was a very late release. If you read the seller’s notes he explains that people were offering him as little as Â£20 for it outside of the auction.

There hasnâ€™t been much going on in the PlayStation collecting scene apart from the usual likes of Suikoden and Castlevania selling for loads. We did though think that it was odd that this sealed copy of Tomb Raider sold for Â£60. A copy of the often forgotten Squaresoft 3D brawler Ehrgeiz went for Â£62.99 too, still sealed. Itâ€™s not a very good game but it features Cloud from Final Fantasy VII, which makes it desirable to collectors.

We rarely feature Atari in these round-ups, so hereâ€™s some Atari stuff thatâ€™s been selling for significant amounts. The toilet-shaped Atari Jaguar CD had very few games and even fewer good ones, but that didnâ€™t stop somebody acquiring one for Â£147 after 13 bids. A sealed copy of Atari Karts on Jaguar sold for Â£89 on Buy It Now, while a prototype Atari 2600 cartridge of the bizarrely named Rabbit Transit went for $250 (Â£156) attracting just one bidder. Nobody wanted these new Atari bed sheets though, and at Â£69 a set itâ€™s not surprising.