The arse end of the â€˜90s was a brilliant time to be a PC gamer. Windows 95 had given PC gaming the huge kick it needed, all new PCs came with CD-ROM drives as standard and dedicated graphics cards were starting to appear.

Back then the newest first person shooters, like Quake and Duke Nukem 3D, would make an appearance on PC first too before appearing on consoles, unlike nowadays when both console and PC versions of a game launch side by side. It wasnâ€™t first person shooters that my first PC was treated to however, but rather a steady flow of â€˜God simsâ€™. Bullfrogâ€™s Dungeon Keeper – masterminded by Peter Molyneux – was a game that was rarely out of my PC – until it got caught in the CD drive and scratched to bits. 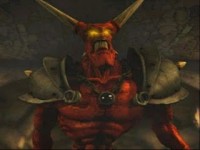 For a game that featured dungeons, orcs, trolls and elves, Dungeon Keeper was surprisingly humorous. You played as the bad guy, for starters, with the idea being to build a dungeon and keep your inhabitants happy. All the while you had to make sure you had enough defences and a strong enough army to stop any enemies from smashing up your dungeon heart. If this was shattered by the enemy then it was game over.

Building different rooms attracted different minions. A large library would draw in warlocks who could fight foes with magic attacks while a hatchery – which provided fresh chickens for consumption – would attract the morbidly obese bile demons. Certain species of minions would fight between one another – like the spiders and giant flies – and so youâ€™d have to break up the fight by dragging them away and making sure their living quarters were a good distance apart. Iâ€™d get so fed up with flies buzzing around my dungeon that I either slapped them to death or stuck them straight in the sacrifice pit.

Fallen enemies could also be turned to your cause by dropping them into a torture chamber. Incidentally, building a torture chamber would bring a PVC-clad mistress into your domain, who liked the torture equipment perhaps a little too much.

Usually you were given plenty of time to get your dungeon up and running before the enemy came knocking. Sticking minions in the training room would beef them up but to do so cost gold, which had to be mined by imps. The brilliantly voiced dungeon master would inform of whatâ€™s going on, and occasionally rival dungeon keepers would taunt you by claiming that, â€œYour minionâ€™s entrails will decorate their domain,â€ and the like. You could also enter a minionâ€™s body and walk around the dungeon in first person mode, if you wished.

After Theme Park proved to be popular on consoles, Bullfrog thought that Dungeon Keeper might sell well too and so versions for the Sega Saturn and PlayStation were planned. Sega-Saturn.net has a short statement from programmer Carsten-Elton Sorensen that provides insight as to how far into development these two versions got before being axed:

“I was hired at Bullfrog to program the Saturn version of Dungeon Keeper in June ’96. I was the only person on this version, working closely together with the PC team. At the time the PC version of DK was still in active development, so I had a lot of catching up to do. I got a graphics engine running pretty quickly, which, by the way, turned out pretty good on the Saturn because of its quad renderer (instead of the now usual triangles). The Saturn’s forward rendering method also meant that roof corners were completely smooth surfaces instead of jagged triangles. However, I had only been working on the Saturn version for a few months when it was canned. I don’t think the game was ever close to running on the Saturn. When the Saturn version was canned I began working on the Playstation version, which was later dropped simply because it was deemed infeasible due to the game’s memory requirements on the PC. As the Saturn version only got as far as displaying a level in third person and first person perspective plus a minimap in the corner of the screen and nothing else – no gameplay, no creatures, no menus or anything, I would say the version was 10% complete.”

Although there was no console versions there was a sequel released on PC which saw the characters go from being 2D sprites to polygon based and included a few extra rooms to construct, including a casino where minions could spend their wages. Hilariously, whenever somebody won the jackpot â€˜70s disco music would play and every minion would stop what they were doing and dance.

Molyneux often makes promises that he canâ€™t keep, but the â€œItâ€™s good to be badâ€ blurb on the front of Dungeon Keeperâ€™s box certainly rang true here.