A few months back we took a look at fast food endorsed video games and came to the conclusion that, despite the licenses having clear limitations, most turned out pretty well. Perhaps the developers were worried that they’d be banned from every McDonald’s and Burger King for life if the games they made turned out to be pap.

Now weâ€™re turning our attention junk food related games. Unfortunately for those who purchased the following, most are nothing short of terrible. Fortunately though many of these werenâ€™t released outside of the US, so not everybody the whole world over had to suffer.

I think Kool-Aid is only known in the UK from the mascotâ€™s wall smashing antics on Family Guy. Itâ€™s not a fizzy drink or canned beverage as you may expect, but rather flavoured powder that has to be mixed with a jug of water and a whole cup full of sugar. Mattel thought this would be excellent source material for a video game and released Kool-Aid Man on Atari 2600 and Intellivision in 1983. The idea was to move a jug of Kool-Aid around the screen collecting what appears to be either bombs or cherries. Itâ€™s hard to tell but theyâ€™re probably cherries, unless gunpowder flavoured Kool-Aid ever existed. The ‘best bit’ was the ‘intro’ in which Kool-Aid man burst though a wall, in a glory of giant pixels.

Sticking with soft drinks, the Japan-only Coca-Cola Kid on the Sega GameGear fairs measurably better. It used the same game engine as Sonic Chaos and, somewhat lazily, even retained a few of the sound effects. The main character is rather nondescript – he was just a kid wearing a baseball cap – but he was surprisingly acrobatic, able to slide along the floor and ride a skateboard. Sega released a red GameGear to tie-in with it.

There was also Coke Wins! – an adaptation of Space Invaders for the Atari 2600 which was only produced for employees of Coca-Cola. Itâ€™s now harder to find than a shop that sells the bronze coloured cans of caffeine free Coca-Cola. 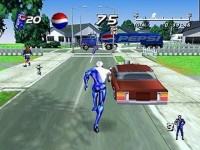 From kids to men – Pepsiman, to be exact. Pepsiman is, or rather was, Pepsiâ€™s Japanese mascot who starred in a range of adverts and no less than two video games. The first was just a cameo appearance in Segaâ€™s Fighting Vipers arcade game. The second was Pepsiman on PlayStation, released in 1999. An incredibly similar game to Crash Bandicoot, it saw Pepsiman running away from giant cans and jumping over fences and whatnot. If Pepsiman tripped and got a dustbin stuck on his head the controls were reversed.

7-UP has had not one but two mascots over the years – Fido Dido and Cool Spot. Interestingly, Fido Dido was not created by 7-UP – he appeared on trendy T-shirts years before 7-UP got their hands on him via a licensing deal. The Genesis/Mega Drive Fido Dido game was canned (no pun intended) but you can see some screenshots of it over at JeuxVideo.

Cool Spot – released on Mega Drive, SNES, GameGear, Master System and Amiga – featured some incredibly nice animation, even on the 8-bit systems, and saw Cool Spot rescuing his chums and bouncing around in giant 7-UP bottles during bonus rounds. Spot also went on to star in Spot Goes to Hollywood, released on Mega Drive, SNES, PlayStation and Saturn. A Sega 32X version was also planned but later scrapped.

More recent is Red Bull BC One on DS, a game which sold so badly GAME were selling it for less than two quid in one of their sales. Customer reviews on Amazon are actually quite positive though. One reviewer compares it to Bust A Move but I assume they mean Enixâ€™s Bust A Groove on PlayStation.

What goes well with fizzy drinks? How about pizza. Dominoâ€™s The Noid is another character likely only to be familiar with our US readers, although like Kool-Aid Man he too has had an appearance on Family Guy. Yo! Noid for the NES was released in 1999 – by Capcom, believe it or not – and saw the red-hued chap trying to stop a doppelganger from causing trouble in colourful interpretation of New York.

Crisps? Crisps. Or as our American chums call them – chips. Depending on how old you are, you may remember Chester Cheetah – his cheesy grin showed up on packets of Cheetos back in the â€˜80s. He has been around in the US since the â€˜70s though and, yet again, appeared in Family Guy. Two games were released on Genesis and SNES – Chester Cheetah: Wild Wild Quest and Chester Cheetah: Too Cool to Fool. They werenâ€™t released in Europe but I can recall one of them being reviewed in Mega Machines magazine (who covered imports) and getting a slating. Chesterâ€™s quest was to find a place called Hip City by finding pieces of a map. Perhaps the best thing about it was the instruction book which was written in very â€˜Engrishâ€™ sounding rhymes: “As is Chester Cheetah way, is one-person playâ€.

The next one is an odd one – Oceanâ€™s puzzle game Push Over (released on Amiga, SNES and PC) didnâ€™t have a product splashed all over it, but it did star Colin Quaver – a cartoon dog used to advertise Quavers back in the â€˜90s. Adventure game Darkened Skye on GameCube and PC is also worth mentioning here – the developers inked a deal with Skittles, presumably for funding, and itâ€™s the said candy thatâ€™s used to create magic. However, the Skittles brand isnâ€™t mentioned on the case. The same goes for Zool, which had an opening level featuring Chupa-Chup lollies, and James Pond 2: Robocod which was sponsored by Penguin biscuits.

Doritos donâ€™t bear a mascot but that didnâ€™t stop them releasing three free games on Xbox Live Arcade. These games were results of â€˜design a gameâ€™ contests and only the first of these – Doritos’ Dash of Destruction – used the brand to any extent. Here, you were given the chance to either escape the jaws of a dinosaur via a Doritos delivery truck or to cause destruction by playing as the dinosaur. Reviews were poor claiming the only reason to play being the incredibly easy to unlock achievements. The next two games fared better – Harmâ€™s Way was a car combat game with online play, while Doritos’ Crash Course (once in development under the name of Avatar Crash Course) was actually pretty good, playing like a rendition of Takeshi’s Castle or Total Wipeout.

So, what can we learn from this article? Nothing really. Sorry.