If you follow the retro scene you must have heard of TecToy at some point. Theyâ€™re the company who handled all things Sega in Brazil, not just publishing their games but also developing new ones and even managing to release a few unpublished games that Europe never saw.

Just about anything with TecToy on it sells for a handsome amount – like this copy of Buggy Run on Master System that went for Â£56 (6 bids) and this wireless Super Compact Master System which bagged Â£84 on a Buy It Now.

The Tectoy website is a source of fascination – theyâ€™ve recently released a Guitar Hero style-music game for the Mega Drive called Guitar Idol, while their latest iteration of the Master System is actually pretty darn sexy. Does it really need six-button joypads though?

From Master System, to GameGear. A brand new pale blue Japanese system – which comes with Ninkuu, a game based on an anime – sold for Â£132 (23 bids).

A boxed copy of Mortal Kombat 3, which was in fact a European exclusive, went for Â£70 due to its rarity. I hope the seller realises how bad a game it is – it plays like the developer made it during their lunch break.

The Game Gear was pretty bulky, but if for some reason you wanted to make it bigger there was a Handy Gear plastic case that offered extra protection for clumsy gamers. One of these sold for Â£17 (12 bids). A boxed bootleg cart also went for Â£50.51 (10 bids). The box claims it contains 68 games but chances are it only has 10 or so games repeated with different names. We took a look at the murky world of bootleg carts a few months ago.

A brand new Game Boy Advance fetched Â£102 (16 bids), but this was no ordinary GBA – it was a Boktai limited edition with a coffin shaped carry case. Very popular with emo collectors, weâ€™d wager. Boktai, for the uninformed, was a very unique game from Konami which had a solar panel built into the cartridge. This had to be used to charge the main characterâ€™s weapon to destroy his vampire adversaries. A million times cooler than Twilight. The buyer could have even displayed his new purchase in this incredibly retro looking Nintendo display case, which sold for Â£75.89 (8 bids).

Speaking of vampires, the desirable Castlevania: Syphony of the Night continues to sell for a packet even though it has been on XBLA for some time. This one went for Â£108 (16 bids). 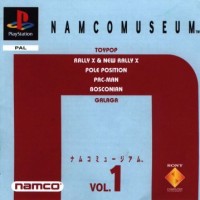 Meanwhile a full set of Namco Museum disks with a Namco joystick zapped Â£175 out of somebody. These didnâ€™t review too well back in the day containing a mere five games on each disk but still retailing at almost full price. Theyâ€™re popular with collectors though as the cases spell out NAMCO once lined up.

Nobody wanted this copy of One Piece: Grand Battle on PS1 for Â£100. If youâ€™re wondering why that price is steep itâ€™s because it was only released in Spain.