Iâ€™m not the type of person who goes around telling people that Iâ€™ll try anything once. This is because peopleâ€™s response is often a lewd and predictable one. I will, however, try just about any game if it’s cheap. And so, itâ€™s Tom Clancyâ€™s HAWX and Cabelaâ€™s Trophy Bucks – purchased for Â£4 each – which Iâ€™ve been playing while waiting for Gears of War 3.

Some of the earlier Xbox 360 games are starting to look a little dated when compared to newer titles. With this in mind, I thought Tom Clancyâ€™s HAWX may look a little shabby, but in fact it holds up well with plenty of detail on both the craft and the landscapes, along with exemplary smoke and cloud effects. Before starting it I was thinking that it wouldnâ€™t take too long to finish, which is something I was right about – it can be flown through in an afternoon.

Amazingly, people are still playing it online. One nice thing about HAWX is people can drop in and out of your game to give a hand, providing you open a lobby before you start. When playing with pals you arenâ€™t forced back to a checkpoint when crashing – instead you respawn, which makes things a whole lot easier. Missions are suitably different from one another, including providing fire support for Ghost Recon teams on the ground and a mission where you have to remain at low altitude for the whole thing, or be blown to bits by an EMP charge.

The final epilogue mission is a little bit strange: after an epic mission to find a warhead and then fly between two buildings and destroy it with one well-aimed missile, youâ€™re presented with a short and easy mission involving flying through canyons and blowing up an enemyâ€™s hillside base. Iâ€™m not sure why Ubisoft included this – it doesnâ€™t really add anything.

Itâ€™s a little harder to find people playing death matches, but with a little patience I managed to get into a game. Itâ€™s largely the same as the main game, only here there are perks like the ability to send out AI drones and repair bots. It takes a fair while to get up to rank 40 and unlock all the weapons and planes, which is why I assume people are still playing. 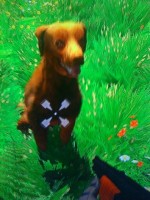 Now, Cabelaâ€™s Trophy Bucks is a fine example of one of the early Xbox 360 games thatâ€™s starting to show its age. Or perhaps it was never that good looking in the first place.

The grass is the same colour as the case the game comes in, and the game world is often restricted with invisible walls. Thereâ€™s a short pause when changing weapons too, suggesting the Xbox 360 has to load up the textures whenever you swap. But itâ€™s not just the textures that are ugly – your hunting dog appearing to have both his eyes poked up with a sharp stick, making him resemble the spawn of Satan.

Itâ€™s not an entirely bad game though – itâ€™s rather arcade like in design, complete with X-ray and thermal vision power-ups – and I certainly didnâ€™t know what ptarmigans and marmots were prior to playing, so it has in some way been educational.

Confession time: itâ€™s not the first Cabela game Iâ€™ve played. Do forgive me, Lord. Iâ€™ve also played through Cabelaâ€™s African Slaughter and Cabela’s Dangerous Hunts 2009. The African one was a lot more user friendly than Trophy Bucks, with a main hub and a helpful guide. Dangerous Hunts was better still with boss battles – including charging animals – and a story mode involving a hunter telling his greatest tales.

Believe it or not there are three Cabela games due out this year. Expect some words about them in 2015 when theyâ€™re Â£4 each.