Struggling publishers usually keep going until they rack up a huge amount of debt and go bankrupt. Not Mindscape, however. Their last couple of games – including U Sing on Wii – havenâ€™t done as well as expected, and so theyâ€™ve decided to retire from the gaming industry and produce interactive toys instead. A brave move. Just think – if Acclaim had done the same thing we could be racing to work on Extreme-G bikes by now.

Letâ€™s say farewell to the company by looking at their some of their most remarkable titles. None of which are U Sing.

A nice platformer with tight controls that was even rather colourful looking on the NES – a format that for some reason had a very dull colour palette. Of course, the Game Boy version wasnâ€™t colourful for the obvious reasons. As Alfred canâ€™t fly springs had to be used to get around. Alfred later appeared on PlayStation in a new 2.5D adventure published by Sony themselves.

A game with a name thatâ€™s a pun? Brilliant. This faced comparisons with Micro Machines when it was released but is still fondly remembered by those who played it. A bit clichÃ©d perhaps – weapons included oil slicks, tracks were set in jungle, Egyptian and city environments – but with four-players via multi-tap it was jolly good fun.

Along with the awful Zelda CDi games, I expect lending Mario to Mindscape is a deal Nintendo wish they had never done. A geography-based educational game aimed at younger gamers, it featured sprites taken directly from Super Mario World. At least that was the case for the SNES version, though the NES version was still quite nice looking considering Nintendoâ€™s involvement was clearly limited. Until Luigiâ€™s Mansion was released this was the only game to feature Luigi was a lead character. According to Wikipedia several facts that appear in the game are incorrect. So much for it being educational.

Another Mario game? Yup. This one was set in 1993 and saw Bowser travelling through time to nab artefacts from the past including Queen Elizabeth I’s crown. Mario and Luigi had to stop him or else history would be altered forever. Reviews werenâ€™t favourable – it was likened to Where in Time is Carmen Sandiego? which wasnâ€™t a very good game either. Check out the box art – I bet you thought youâ€™d never see Mario and Abraham Lincoln together. Pity the child that received this for Christmas instead of Mario Kart.

Quite possibly Mindscapesâ€™ most renowned piece of work. Much like Myst, it gained a lot of press coverage simply because it was one of the first PC-CD Rom games. It wasnâ€™t a very good game, playing like a mixture of Spy Hunter and Road Blasters, but it was popular enough to spawn a couple of sequels.

EDGE magazine released some one-off magazines dedicated to retro gaming many years ago. In one of these each of their current writers picked an old game and reviewed it as they would have done if EDGE existed when their chosen games were released. One reviewer picked Captain Blood – a graphic adventure driven by an icon based interface. 120 different icons, no less. They gave it a 7, praising the gigeresque interface and inspired touches. Quite funny that they used the word ‘inspired’ there seeing that one of the aliens you come across resembles Yoda. 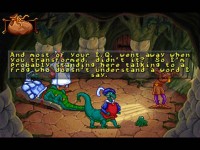 Monty Pythonâ€™s Terry Jones narrated this point and click adventure. Reviews were incredibly mixed – Saturn Power loved it, while the Official Sega Saturn Magazine felt quite the opposite. But thatâ€™s point and click adventures for you – they arenâ€™t always going to be everybodyâ€™s cup of tea. Those who enjoyed this drew comparisons with the first Discworld game, and a quick look on eBay reveals that copies can fetch over Â£20.

From blazing dragons to blazing trails. This is one weâ€™ve mentioned on Games Asylum recently – a 3DS version was reported to be in development by Retro Gamer magazine a couple of months ago. Requiring swift reflexes, itâ€™s a game that still plays as well today as it did back in the â€˜80s, simply requiring you to move a ball out of harm’s way as it rolls down a path at an increasing pace. The Gizmondo version – which wasn’t published by Mindscape – is one of the few reasons to buy the failed handheld.

Mindscape was also responsible for bringing other companies’ games to different formats back in the day. They helped Wizball bounce onto the PC, released the Bitmap Brothersâ€™ Speedball and Xenon 2: Mega Blast on Game Boy, helped Paperboy and Gauntlet leap from the arcade to a range of 8-bit formats, and assisted Wing Commander to wing its way onto the SNES. They released a game based on Captain Planet and the Planeteers too, but letâ€™s ignore that shall we? No publisher is perfect after all.