Every month Matt pulls a magazine out for under his bed and gives it a fine going over. Stop giggling at the back there â€“ weâ€™re talking about a video game magazine. This month: issue 7 of Future Publishingâ€™s Saturn Power from December 1997. 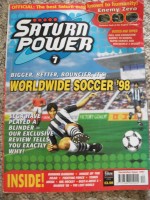 When the Sega Saturn was breathing its final breaths, the Saturn magazine market was a two horse race – The Official Sega Saturn Magazine and Saturn Power. Saturn Power was something of a late comer to the Saturn scene – by the time it arrived in 1997 is was already clear that there was no way Saturn sales were going to catch up with those of the PlayStation.

When the magazine launched a very bold promise was made; one that the editor no doubt regretted making. That promise was that every issue would come with a playable demo disk. The official magazine only had demo disks when they had enough content to fill one; usually every three or four issues. But rather than fill the disks with games from all different developers, Saturn Powerâ€™s disks were going to showcase games from one developer at a time. The first offered the efforts of Core Design – Tomb Raider, Blam Machinehead, Swagman and a rolling demo of Fighting Force. The second showcased Gremlin, containing demos of Reloaded, Actua Soccer and Hardcore 4×4. Incidentally, both Fighting Force and Reloaded were canned before release thus making those disks nice items for Saturn collectors.

It quickly became apparent that they were struggling to get developers to produce these exclusive disks – the third issue came with a music CD simply to not let the readers down on their promise. The fourth issue came with no disk at all whereas the fifth issue did come with a disk but it contained just one demo – WipEout 2097. After this, the price was dropped from Â£4.99 to a rather appealing Â£2.50.

Although Saturn Power only lived for 10 issues it was around for long enough to rattle the cages of the writers of the official publication, often having a little dig here and there. The most memorable of these was when they pointed out that the magazine had based a multiple page preview of The House of The Dead on a demo (which theyâ€™d also been shown) that was so early in development that only the first level existed in an incomplete form.

One advantage that Saturn Power had over its rival was that they were able to review import titles. The official publication on the other hand could only preview imports via the means of rather ambitiously speculating that theyâ€™d get a European release. This lead to Saturn Power discovering what they believed to be the worst Saturn game ever released – a horrid looking Japanese light-gun game named Death Crimson. 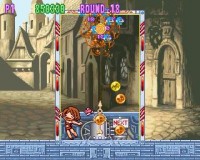 When PAL releases came hard to find (only Sega, EA and GT Interactive thought the Saturn was worth bothering with during its final months) the last few issues featured around two or three PAL reviews and a handful of imports. The issue weâ€™re looking at here is dated December – usually a very busy time for new releases – but it only has three reviews, two of which were sports updates. The other release was Bust-A-Move 3, which was hardly anything to get excited about.

Saturn-related news was so thin on the ground in the last few issues that the news section was more of a rumour round-up for what was to become the Dreamcast. Other regular features included an RPG section – complete with Wil Overton artwork – and a directory of the top 100 Saturn games that was updated monthly. Sega Rally took the top spot, if youâ€™re wondering.

Issue 10 – which featured Panzer Dragoon Saga on the cover – was the last to be published. But whereas most magazines simply disappear off the shelves after being axed by their publishers, Saturn Power was able to give their readers a goodbye message:

I’m afraid I have the most saddest of news to report this month… this issue of Saturn Power will be the last one to be published. After many months of praying and hoping for a miraculous change of direction in the fate of the Saturn, we finally have to admit that there just isn’t a market for the machine and another magazine. This is obviously tragic as (speaking on behalf of the entire team) we’ve really enjoyed the past years on the mag and kept up the enthusiasm until the very last.

So, who’s to blame? You already know that the market’s drying up, the amount of software is virtually non-existent and that, coupled with the (to be perfectly honest) weak support by Sega themselves has done little to help our cause.

Sega Saturn Magazine will probably squawk like crows on E because of this news, but they were always going to be the best selling magazine. They had the support from Sega (and let’s face it, who else is producing games nowadays?) and a regular guaranteed CD; the official tag was never going to harm them, was it?

On behalf of the team, I’d like to thank everybody who’s helped us over the years and placing the cringy, beeery, yer’ me best mate honest hat on, you lot the readers for all your letters, feedback and support. Hey, it was fun. Let’s do it again sometime.

RIP Saturn Power. You never really had a chance, but man alive, you gave it your bloody best shot.