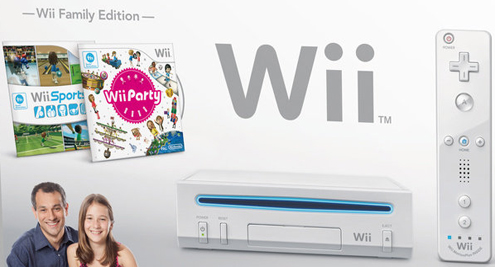 Presumably to get some extra mileage out of the Wii and keep it in the publicâ€™s eye until the Wii U is released, Nintendo has shown off a new slimmer model. Itâ€™s due out for Christmas and comes bundled with two games – Wii Sports and Wii Party – along with a Wii Remote Plus with nunchuk.

Much like the new PSP E-1000 that Sony showed off yesterday, it doesnâ€™t look that much different from the original model. The only notable differences are the blue bezel around the disk drive and the fact that itâ€™s designed to sit horizontally rather than vertically. In order to cut costs, it wonâ€™t be compatible with GameCube games or accessories either.

This decision caused mild upset during the Nintendo community, and some might say that upset is unwarranted – people have had five long years to go out and buy the original backwards compatible Wii. Also: this â€˜Family Editionâ€™ (as Nintendo themselves call it) isnâ€™t going to be aimed at those who want to play Doshin the Giant and Chibi Robo between Mario Kart Wii sessions.

No price has been announced, but Nintendo has confirmed that itâ€™ll replace all existing models once stocks run out in Europe.

In related news, JRPGs The Last Story and Pandoraâ€™s Tower have also been confirmed for Europe, making the Wiiâ€™s 2012 line-up look a whole lot rosier than it did, well, any time prior to this news breaking.