Rather than lazily shove a handful of demos onto a disk and tie them all together with a rudimentary menu system, Sony put an awful lot of attention into the curiously titled Demo One – the disk that came bundled with every fresh PlayStation. I assume they put effort into it for two reasons. Firstly, it was highly likely that shop owners would use this disk on their demo pods. Secondly, to make sure your first impression of your shiny new console was a good one. 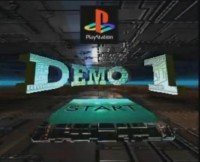 After seconds of popping the disk into your PlayStation you knew that Â£299 purchase you’d just made was worth every penny. It proverbially kicked off with an intro showing clips of the PlayStation launch titles mixed with CGI while the then-impressive tech-specs of the PlayStation whizzed across the screen, all of which was accompanied by a suitably fitting trance music track.

The demos themselves were rather generous segments of just about every PlayStation launch game, including Toshinden, WipEout, Destruction Derby, Loaded, Jumping Flash and a non-playable demo of Total NBA. A revised version of the disk added ESPN Extreme Games and Novastorm – an early FMV shoot â€™em up. The Toshinden demo offered three characters to play around with while Destruction Derby gave the chance to try and survive one of instantly entertaining destruction arenas.

FMV clips of Ridge Racer, Ace Combat, Tekken, Twisted Metal, Assault Rigs and now hard to find 2D shooter Rapid Reload also featured for your viewing pleasure. I assume they didn’t include a playable demo of Ridge Racer as it only had just one track – it would have been akin to giving the full game away.

To show off the PlayStation’s technical prowess Sony kindly included two tech demos as well, one of which was of a T-Rex. It didnâ€™t look quite as good as the CGI dinosaurs in Jurassic Park but it was still quite impressive. Fun could be had, for literally seconds, by making it open and close its mouth by pressing trigger on the joypad. There was also a 3D model of a mantra ray, which was slightly less impressive but quite relaxing to mess around with thanks to featuring some chilled music.

Rounding everything off was a V-CD program that would create trippy effects to any music CD you placed inside the PlayStation. Sony released new versions of Demo One every few months with later versions having games like Tekken II, Ridge Racer Revolution, Kula World and Tombi on – yet the name Demo One always remained, which is slightly bizarre.

Simply by typing â€˜Demo One PlayStationâ€™ into Google you can find forum conversations dishing out praise and fond recollections. For a mere collection of demos, it certainly has made a long lasting impression.