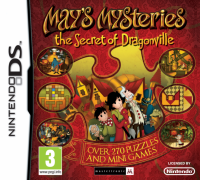 If you thought last week was bad for new releases – with just three titles hitting shop shelves – then get a load of this week.

Thereâ€™s just one game out, and thatâ€™s the largely unknown May’s Mysteries: The Secret of Dragonville on DS. The promotional video on YouTube suggests that it has much in common with the Professor Layton series, only from the looks of things the majority of puzzles take the form of those absurdly popular hidden object games.

In the world of downloads thereâ€™s Insanely Twisted Shadow Planet – the latest instalment of Microsoftâ€™s Summer of Arcade promotion. Our Twitter followers have had plenty of good things to say about it, so it was a bit of a surprise when the usually reliable Eurogamer dished out a 6/10. Probably best to download the demo and make up your own mind.

The above may only be exclusive to Xbox 360, but Brinkâ€™s add-on pack Agents of Change is available on Xbox 360, PSN and Steam. Whatâ€™s more is that itâ€™s free for the next two weeks as the developerâ€™s way of saying sorry for server issues during the gameâ€™s launch. It doesnâ€™t sound like a bad package – two new maps, five additional abilities, two new weapon attachments and two new outfits. Thatâ€™s as well as a fresh bunch of achievements/trophies to unlock and the chance to get your character up from level 20 to 24. You can read what we thought of Brink here.