You canâ€™t get any rarer than something thatâ€™s one of a kind. With this in mind, Iâ€™m surprised that there arenâ€™t more people out there customising their consoles. Thereâ€™s certainly a demand for them on eBay – a NES-style custom GBA SP went for Â£51 (14 bids) earlier this month. You have to wonder though why they didnâ€™t just buy the official Nintendo NES edition GBA SP.

Not every unique console is desirable though – if you donâ€™t do a very good job on it then itâ€™ll end up selling for peanuts, like this horrifically butchered GameGear which sold for Â£3.20. Thatâ€™s less than what normal GameGears usually sell for. Then thereâ€™s this Xbox 360 fitted with blue LEDs and plexiglass that sold for a mere Â£41 (7 bids).

Coloured GameGears are pretty uncommon full stop. The UK never received any other colour other than black while the US only received black and blue â€˜Gears. Japan was another story with Segaâ€™s 8-bit semi-hit available in half the rainbow. The white GameGear and Cola-Cola branded red GameGear are the most desirable. Iâ€™d say that after those two comes the yellow GameGear, one of which bagged a German seller 112 Euros (Â£98.86). As mentioned several times on Games Asylum, there are more than a few GameGear games worth a pretty penny about, like the uber rare Tarzan: Lord of the Jungle. A loose copy went for Â£48.99 (13 bids). This is one of the first games Eurocom (of GoldenEye on Wii fame) ever developed and, well, it certainly looks and plays like somebodyâ€™s first attempt at making a game.

Last month we reported that the Zelda edition GBA SP had shot up in value. Thereâ€™s no sign of that price dropping just yet – one sold for Â£190 via best offer. Another went for Â£77 (8 bids). I assume that when the seller describes it as being in â€œgood conditionâ€ he was talking about the handheld rather than the box it comes in. Also of note is this GBA SP bundle that ended at an incredibly high Â£82.80 (10 bids). It was unboxed and half the games were trashy kidâ€™s titles. It did though come with a fair few Pokemon games. Or perhaps somebody was desperately after the Mega Man game? 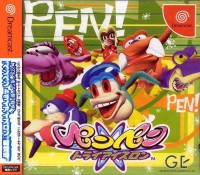 Speaking of the blue hued bloke, a copy of Mega Man – The Wily Wars on Mega Drive ended at Â£210 (20 bids). It may not please the fashion police but a Sonic 2 jacket – supposedly only given away to Sega employees – broke the Â£200 barrier too attracting 15 bids.

On the flipside, hereâ€™s a bargain – a bundle of 98 new and sealed Japanese Dreamcast games that sold for only $309 (Â£189). Who can spot Pen Pen Triceleon in that photo? Iâ€™m still amazed it kept that name when it was released in the west. You would have thought that the publisher would have changed the name to Crazy Animal Racing or something similar.

The seller of this PS1 three game bundle must have known that Konamiâ€™s Azure Dreams is rare as he started the auction off at Â£70. Only one person bid. A Crash Bandicoot soft toy fetched a fair old whack too – Â£55 via best offer. I’m pretty sure I saw those as prizes on Brighton pier once.

Iâ€™m not sure why the following always sells for a bit on both PS1 and Sega Saturn, but a copy of Mortal Kombat Trilogy on the latter punched Â£46 out of somebody after 17 bids. And what better way to play it than on a proper arcade joystick, like this Namco branded one which sold for Â£41 (8 bids).