Every month Matt pulls a magazine out for under his bed and gives it a fine going over. Stop giggling at the back there â€“ weâ€™re talking about video game magazines. This month: issue 1 of Mr. Dreamcast from April 2000. 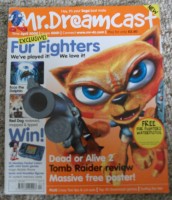 Itâ€™s fair to say that there were more than enough magazines dedicated to the Dreamcast. There was the surprisingly honest Official Dreamcast Magazine, the dull-titled Dreamcast Magazine, Future publishingâ€™s DC-UK and the typo-filled Dreamcast Monthly. Then thereâ€™s was Mr. Dreamcast, which lasted all of two issues. If the name alone doesnâ€™t tell you that it was aimed at younger Dreamcast owners, then the fact that the first issue came with a water pistol surely does.

Believe it or not, Mr. Dreamcast was edited by former DC-UK editor Caspar Field, who was also once deputy editor of EDGE. Digitisersâ€™ Paul Rose (aka Mr. Biffo) reviewed not one but two games in this launch issue too – JoJoâ€™s Bizzare Adventure and Street Fighter Alpha 3. We like Mr. Biffo around these parts, even if he did only give Alpha 3 a score of 75/100. Much like DC-UK, a NeoGeo Pocket Color section with reviews and news was a “regular” feature.

In terms of design it had a very bright and breezy look and even though it focused on kidâ€™s titles (Fur Fighters was on the cover of issue 1; Wacky Races on issue 2) more mature games such as Resident Evil 2 were still covered. Most pages were light on text and plastered with giant-sized screenshots. This issue also contained some pull out posters and a model of the car from Crazy Taxi which you could cut out and assemble. Wahoo!

The scoring system for reviews was slightly novel. Graphics, sounds, controls and ‘ideas’ were each awarded up to 25 points and then tallied up to provide a total. The NeoGeo Pocket reviews on the other hand were simply given a â€˜hit, miss or maybeâ€™ rating.

According to the internet, issue 1 managed to sell a reasonably impressive 12,000 copies. I certainly hope those who took up the chance to subscribe for Â£1.66 an issue were given a refund when the magazine was culled one issue later.