Time has been kind to a lot of scrolling beat â€™em ups from the 16-bit era – Golden Axe and Streets of Rage still play as nicely now as they did back in the â€˜90s. I think the reason for this is that the third dimension hasnâ€™t really benefited the genre the same way as it has, well, almost every other genre. Take the recent scrolling brawlers on Xbox Live Arcade as examples. They may look fancy but theyâ€™re still a case of walking from left to right, battering goons and occasionally picking up a weapon. 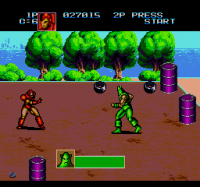 Time, however, hasnâ€™t been very kind to Captain America and The Avengers, because it wasnâ€™t very good in the first place. Even with poor reviews in the magazines of the day, I think itâ€™s fair to say that a lot of people were duped into buying this on name alone, as copies are always easy to find on eBay. The GameGear version is an exception though – it was only released in the US and boxed copies can fetch a small packet. More about that version in a moment.

Originally released by Data East in the arcade, four superheroes are available – Captain America, Iron Man, Vision and Ethan Hawke (Hawkeye). Captain America and Iron Man need no introduction, but the other two may be new to you. Vision is an artificial being powered by a gem on his forehead, while Hawkeye has no special powers but has great marksmanship and acrobatic skills, due to being raised in a circus. He’s also brilliant at face-painting and making balloon animals.

Each character has their own projectile attack and, actually, thatâ€™s your lot for specials moves. Which leads us to problem number one – it doesnâ€™t matter which character you pick as theyâ€™re identical. Visually it looks crude too – this was released the same year as Streets of Rage 2 so even back when it was originally released it was panned for being on the ugly side, let alone now.

The GameGear and Game Boy versions play more like platformers, but even they too are as basic as a piece of paper. Some enemies arenâ€™t even animated – they just stand on the spot with their arms outstretched firing bullets. Captain America can throw his mighty shield, but after flinging it he still has a shield in his hands. Itâ€™s like the developers couldnâ€™t even be bothered to draw a sprite without a one.

Itâ€™s a game that should have remained in the arcade where you could stick a few quid in, enjoy it for what it is, and then walk away. To release it on the home consoles of the era was a bigger mistake than Superman wearing his underpants on the outside.