New games for old systems arenâ€™t as uncommon as you may think. There have been a few RPGs localised and released on cartridge for the Mega Drive recently and the Dreamcast still receives a new shootâ€™em up every few months. Even the Atari Lynx has had a new release recently in the form of the penguin-laden shoot â€™em up Zaku. 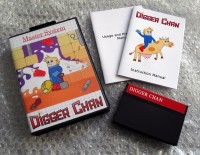 However, Digger Chan marks the arrival of the first Sega Master System game since 1998. It has a lot in common with Namcoâ€™s Mr. Driller, only here Digger Chan is on a worldwide mission to repair milk pipelines buried deep beneath the ground.

Itâ€™s not a totally new game to the Sega Master System community – it was first released as an entry for SMS Powerâ€™s 2006 coding competition – but since then new levels, music and an ending sequence has been added. And of course, itâ€™s now available to buy on cartridge, using all new components.

The first batch of cartridges has already sold out, but a second run is on the cards. Get your order in quick if youâ€™re curious.