The humble Game Boy had a full and long life that very few other consoles can match. New releases did slow down around the mid ’90s, but then came along came a little game known as Pokemon and eventually the Game Boy Color rightfully took the reigns. Even then though some Game Boy Color games were backwards compatible with the original Game Boy. The brilliant Monkey Puncher for instance.

As you can probably imagine there are more than a few obscure titles for the monochrome machine. If you have heard of at least, letâ€™s say, two of these titles below then give yourself a pat on the back.

Amazing Penguin – 1990
Penguins are amazing. They can dance and everything. This game sadly wasnâ€™t quite as amazing as the star, being a very crude and basic single-screen puzzler similar to Qix. Fortunately Natsume soon went onto bigger and better things. Namely, Harvest Moon. Which didnâ€™t star a penguin. Sadly.

Amazing Tater – 1991
Another game that possibly breaks the trade descriptions act due to not being amazing. This block-shoving puzzle game was ugly to look at but there is a bit of history behind it – itâ€™s the sequel to Quirk, which was a quite popular puzzle game back in the day. Keep reading for more potato-related tomfoolery. 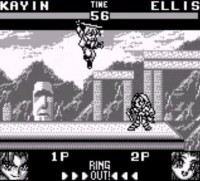 Battle Arena Toshinden – 1996
Despite not being as good as Tekken, Toshinden was very popular on PlayStation. You can probably link this to the fact that it was on the demo disk that came with every PlayStation console. Takara saw fit to release this 2D version, which featured the same characters from the PS1 original but in shrunken and more cartoon-like form. A darn sight more playable that the Game Boy version of Street Fighter II.

Darkman – 1991
Ah, good old Ocean. If there was a licensed game released in the ’90s, chances are they were behind it. This was a comic-book tie-in staring a rather nondescript chap in a trench coat. Playing like a poor manâ€™s version of Double Dragon, itâ€™s a game best left in the dark.

Fish Dude – 1991
Yes, somebody thought ‘Fish Dude’ would be a good name for a game. Ecco the Dolphin meets Fishing Frenzy sums this one up perfectly. Not the worst game ever but, well, it’s called Fish Dude. 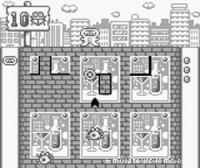 Burning Paper – 1993
Very bizarre, this one. Controlling a laser-totting robot, you had to cut away chunks of posters with your laser so that they fell off the wall youâ€™re standing on and hit the bugs that are making their way up to the top. The designers must have been on drugs, etc.

Spud’s Adventure – 1991
See – I told you there was another potato-laden game in this article. Taking inspiration from the original Zelda, this top down adventure game features very similar dungeons and gameplay mechanics. Quite a hard game to find nowadays. Maybe the citizens of Idaho snapped up all the copies?

Maru’s Mission – 1991
Thereâ€™s a chance this could appear on 3DSâ€™s eshop – other games from Jaleco featured in Nintendoâ€™s promotional video. If it does get re-released, I would certainly say itâ€™s worth a download – this Ninja-starring platformer is both fun and good looking. Awful boxart, mind.

Hammerin’ Harry: Ghost Building Company – 1993
Another very good looking game considering the Game Boyâ€™s limitations. And a very fun one at that, with an emphasis on bashing stuff with various mallets and causing destruction. Much like Mario in Super Mario Land, Harry also gets to pilot a plane. Never released in the US, this is a game that only the Japanese and Europeans got to enjoy.

Momotaro Dengenki 2 – 1994
Or Momotaro Thunderbolt 2, to give the name a translation. A very fun and polished platformer from Hudson that looked more than super when played on the Super Game Boy. The main character throws peaches at foes – which are of a slightly naughty shape – and can also transform into animals by finding different costumes. Get hit too many times though and he ended up running around in the nude. Even Ghouls â€˜nâ€™ Ghostsâ€™ Arthur had the decency to put on a pair of boxers before venturing out.