Due to a combination of a lack of time, money and experience, most console launch games tend to be either on the basic side or rushed out. The Game Boyâ€™s line-up was no different, comprising rather basic games such as Alleyway, Yakuman (MahJong) and rudimentary sports titles. Then there was Super Mario Land – a fully fledged Mario adventure in the palm of your hand.

As youâ€™re probably aware, Super Mario Bros. 2 on NES was originally as an Arabian-themed platformer called Doki Doki Panic, yet many of the enemies – such as Birdo and the Shy Guys – are now a staple in the Mario universe despite it not originally being a Mario game. With this in mind itâ€™s slightly peculiar that many of the elements from Super Mario Land have never featured again.

The setting is distinctly Egyptian-themed with pyramids and Sphinx-like bosses, while enemies include giant bugs armed with spears and robots who could send their heads spinning towards the portly plumber. Koopa Trooper shells could not be kicked nor carried. Instead they exploded after being crushed, making them twice as deadly. Mario could also pilot an aeroplane (named Sky Pop) and a submarine (Marine Pop). Itâ€™s the former thatâ€™s used to defeat the last boss – a purple alien in a spaceship called Tanga. Nintendo must have thought that Bowser needed a day off. 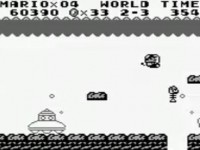 Visually Super Mario Land was crude – comparing it to the sequel, subtitled 6 Golden Coins, is like comparing Super Mario Bros. to Super Mario Bros. 3. The controls remain tight as responsive as always though, and there are still warp pipes to bonus areas filled with coins to find. Oddly, instead of 1-UP mushrooms there are glowing hearts that give Mario an extra life. I assume that this was because of the Game Boyâ€™s colour palette (or rather, lack of one) as it would have been impossible for the artists to make them look different enough from regular mushrooms that make Mario grow.

The music was catchy enough to spawn a pop record which went to #8 in the UK charts in 1992, as detailed here. I think it was a little of lazy of Nintendo to simply use The Can Can as the music that occurs after nabbing an invincibility star, but given how imaginative the rest of the game is I think that can be excused.