Ideally it would have been ready for launch but itâ€™s certainly a case of better late than never for the 3DS eShop, available from today via a system update. 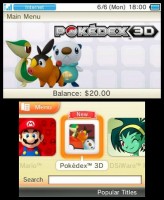 To make up for its tardiness, Nintendo are giving away Pokedex 3D and 3D Classics Excitebike for free. I was assuming that Excitebike would be a playable version of the skin that appears in the 3DSâ€™s music player but this isnâ€™t the case – itâ€™s the NES original with an extra dimension. Although old there are a few little tricks learn before getting good at it and it also has a track editor.

Three Game Boy games are also available to download. Oddly, Nintendo has decided to price them up differently. Super Mario Land costs Â£3.60 while Alleyway and Tennis are Â£2.60. Does this mean that later games will cost even more than Â£3.60? We bloody hope not.

As well as a web brower there are 3D trailers of Dead or Alive: Dimensions and Zelda: Ocarina of Time to ogle at, each lasting around 30 seconds each.

As we extensively covered here, Sega are planning to release a range of GameGear games onto the 3DS Virtual Console soon including Sonic Triple Trouble.