“Hey, Sony are doing their E3 show tonight, can you cover it?” were Matt’s last ill-fated words to me. So, following on from our Microsoft E3 conference wordage, are these words.

Much like Microsoft’s show, which had a heavy Kinect theme – because we all know standing up and waving your arms around is a vastly superior control method than ten fingers and a joypad – Sony’s E3 extravaganza had two clear themes, 3D and PSVita.

The important news for PSVita fans (how wrong does that sound?) is that the nice little handheld will be retailing for â‚¬249, or â‚¬299 for the 3G version, with a Christmas launch date, this year obviously. If you’re Stateside, the price is $249 and $299 respectively, because clearly $1=â‚¬1 in Sony’s world. Either Sony knows something we don’t (Greece is going to default and devalue the Euro?!) or they’re greedy arseholes, but that’s nothing new. On the bright side, it’s the same price as the Nintendo 3DS, when most people (idiots mainly) were expecting it to be much more expensive.

Other than that, the PSVita is much like it was when it was announced in January. It still has a 5-inch 960×544 pixel OLED screen, and quad-core CPUs and GPUs which are the same type the iPad 2 uses (although the iPad 2 uses dual-core versions). You can read more about the specs here.

Sony demoed a whole bunch of PSVita games, most of which we’ve seen before admittedly. Uncharted: Golden Abyss looks nice, as did LittleBigPlanet and ModNation Racers with its neat track editor.

A Diablo-style RPG game called Ruin made an appearance, which boasts the ability to seamlessly play the game on both the PSVita and the PS3, swapping sessions between each system.

So yeh, the PSVita looks like it will have lots of nice little games, and could improve commutes for literally millions of people, unless those people find playing iPhone games less shameful in public.

On the PlayStation 3 side, Sony’s unsurprising theme was 3D for the PS3, with a little bit of Move on the side as motion-control has become mandatory for all games companies. Sony’s big focus on 3D is presumably due to all the 3D Sony Bravia TVs they hope to sell, so it’s kind of understandable.

Sony are so into their 3D, that in addition to making blurry, half-resolution 3D versions of all their new games, they’re also releasing a PlayStation 3D TV, which is a 24 inch 3D TV that comes with a pair of 3D glasses and a copy of Resistance 3, all for $499. A kind of cheap entry point to 3D, so possibly a reasonably good idea. It also features a magical technology that lets two players play split-screen games each using the whole screen (only seeing odd or even lines of pixels, with the glasses blocking out one image).

Fans of stealthy raccoons should be overjoyed to hear about Sly Cooper 4, which follows in the footsteps of 1, 2 and 3.

Nostalgics should be pleased with the Team ICO collection, which is a remastered re-release of ICO and Shadow of the Colossus, in HD and 3D (presumable half HD if viewed in the 3D mode). 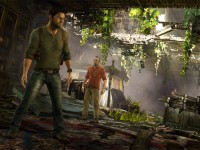 Of course, the big thing for PS3 is Uncharted 3, which is Sony’s own Frank Lampard endorsed Tomb Raider. It still looks great, it’s still due for release this October and should be brilliant.

An interesting PlayStation exclusive is Dust 514, the EVE Online sister-game – a first person shooter that exists in the EVE universe, sharing the same servers. It will be playable on both the PS3 and PSVita, and won’t be coming to the 360, which is probably a big deal for Sony.

Aside from that, Sony showed quite a few other games, mainly existing IPs, which now feature 3D modes or Move functionality. One new title is Star Trek, based on the new films, which lets you control Kirk or Spock with the Move controller. Apparently it comes with a special phaser-shaped holder to stick your Move controller into. Hmm.

Yep, that was pretty much it. At the start Sony’s US boss Jack Tretton apologised to everyone for fucking up the PlayStation Network and allowing everyone’s accounts to be hacked. Sony are offering free downloadable games to everyone as a way to say sorry, which you can claim either by logging in to your PSN account or emailing Sony’s Nigerian office.

Next up at E3: Nintendo unveil new games featuring Mario, demo a host of 3DS titles, and possibly unveil their next console which hopefully won’t be as rubbish as the Wii.

Fresh out of the arcade, Jitsu Squad hits consoles later this year