Swords & Sworcery was the first iPhone game I had a real expectation of pre-release. Cruel, then, that it was released on iPad first. But hey ho, the anticipation is all part of the enjoyment. And I was happy enough to wait: it looked cool, seemed to have an interesting attiude, and Jim Guthrie was involved (see the album ‘Alone at the Microphone’ by Royal City). 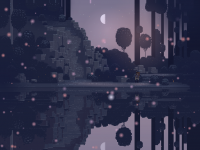 All those things are still true. The visual style is distinctive, consistent and beautful â€“ in a blocky sort of way. The music is atmospheric, varied, and utterly integrated with the graphics and action. Together they build a charming atmosphere.

Then there’s that attitude: knowing; very ‘meta’, if you’ll forgive the term. In execution it ranges from amusing to downright off-putting. It’s all very well undermining the sometimes po-faced adventure genre, but undermining your own engaging atmosphere is not clever.

Especially when atmosphere is what the game’s mainly about. There’s a quest behind it of course â€“ jobs to do, foes to vanquish â€“ but it’s fairly skeletal, and a touch on the repetitive side. But just when you’re getting a bit sick of backtracking, battling the same couple of varieties of bad things, and solving the same basic puzzles, it throws you a treat.

There are a couple of pure revelations, when what’s possible in the game’s world expands completely. But just as pleasing are the smaller moments: discovering a new mechanic, subtle riffs on familiar puzzles, a visual or aural delight.

There’s guidance along the way, to the point that you generally know your character’s task, but not necessarily how you as a player make that happen. It’s curious: working out what makes the game tick is simultaneously satisfying and frustrating.

That’s what the game comes down to, ultimately: trying to understand the very specific vision the developers had. I’m not convinved that it’s a completely successfully realised vision, but it’s certainly worthy of investigation.