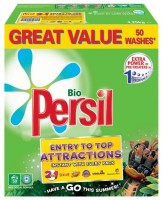 Codemasters’ focus on few titles but of a better quality is paying off – the company hasn’t released a duff title in a long time. Following suit is DiRT 3, which was actually released earlier this week. Sadly for PlayStation 3 owners the early release isnâ€™t so much of a boon for them – it requires access for the PSN store, which is still down, to be able to play online. By all accounts though itâ€™s a very good game. Even EDGE dished out a 9 for it.

The rest of this weekâ€™s releases are an odd bunch. On 3DS thereâ€™s Spongebob SquigglePants – which THQ have been suspiciously quiet about – and the PSP-exclusive Gladiator Begins from PQube, which looks doesnâ€™t really look any different to Acclaimâ€™s Gladiator: Sword of Vengeance from 2003.

Then on Wii thereâ€™s Exerbeat Gym Class Workout from Namco. Much like most Wii releases these days, it has a purse pleasing price tag.