Every month Matt pulls a magazine out for under his bed and gives it a fine going over. Stop giggling at the back there – weâ€™re talking about video game magazines. This month: issue 149 of Electronic Gaming Monthly from December 2001. 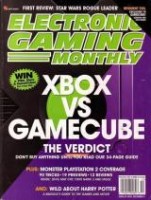 American magazine Electronic Gaming Monthly – later in life abbreviated to EGM – had the type of reputation that very few magazines could ever reach. Completely unbiased, they were not afraid to give their honest opinions during reviews and even infamously once named and shamed publishers who threatened to pull adverts if review scores werenâ€™t high enough. They also once agreed to put some new Mortal Kombat game on the cover but quickly dropped the deal when the only screenshots they were given were CGI renders.

Rather than having just one person write a review, three reviewers stepped in to give their own score on each game. This was interesting as their verdicts didnâ€™t always match. In the issue weâ€™re looking at this month, which tied in with the launch of the Xbox and GameCube, two reviewers gave Luigiâ€™s Mansion an 8.0 while another gave it 5.5. Common sense tells us to go with the majority, but it was always interesting in cases like this to see what the minority had to say.

If there was a problem with the magazine, it was that it was incredibly advert heavy. In issue 149, out of the first 12 pages 10 of them are adverts. When opening an issue for the first times dozens of postcard-sized subscription adverts would fall all over the floor too, even if it was a subcription copy you were reading.

Regular features included Quartermann, who sniffed out the best video game rumours (many of which turned out to be true) and Seanbabyâ€™s Rest of the Crap section in which Sean – who you can follow on Twitter – was forced to try out all the rubbish theyâ€™d been sent that month. EGMâ€™s April Fool jokes are well remembered too and managed to dupe many gamers into thinking things like Mushroom Kingdom Hearts, LEGO Halo and a Lord of the Rings kart racer were being developed.

Regrettably EGM came to an end in 2009 – at least in print form – nearly twenty years after it first launched. It was tough to find in the UK – I usually had to visit two or three WH Smith stores to get a copy – but it always worth the trek.

EDIT: Turns out EGM was resurected in April 2010, in both download and print forms. They have a website and everything.