With the Portal 2 ending song proving absurdly popular on YouTube, spawning numerous remixes and tributes, now seems a good time to look back at a very short fad from the ’90s. For reasons unknown – or at least for reasons that didnâ€™t involve making money – record labels thought that releasing remixes of music from popular video games was a fine idea.

This started off in 1992 when somebody thought that mixing the Tetris theme tune with a 2-Unlimited influenced techno score would make for tuneful listening. That somebody was, I kid you not, Andrew Lloyd Webber. As such itâ€™s probably the best of the bunch mentioned in this article, although incredibly similar to a lot of dance tracks from the ’90s. It managed to make #6 in the chart and was later included on a NOW compilation CD. The B-side had a name which couldnâ€™t be any less subliminal – ‘Play Game Boy’. 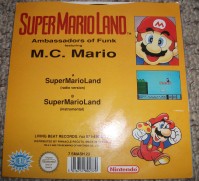 Super Mario Land was the next game to be given the treatment. That was in the form of Super Mario Land by Ambassadors of Funk featuring M.C. Mario, and featured rapping over the music from the first level of Super Mario Land on Game Boy. As youâ€™d expect, the lyrics were painfully cheesy which such lines as â€œEven my ma, she thinks I’m crazy / But I’ve got to rescue Daisy!â€ The B-side on this ‘effort’ was simply an instrumental version while the cardboard sleeve featured a screenshot of Super Mario Bros. 3 on NES for some odd reason. It made #8 in the UK charts and managed to hang around the chart for a good 8 weeks. A follow up called Go Mario Go! was released but did so poorly it didnâ€™t even manage to chart.

Segaâ€™s blue blur was the next victim, appearing on the cover of SuperSonic by HWA (Hedgehogs With Attitude). I never managed to find a copy of this back in the day, which was probably because it entered the chart at #38, went up to #33, and then swiftly left. In fact, the first time I ever heard it was while researching this article. HWA simply blended parts of the Green Hill Zone music with a generic dance track and seemingly threw in some Sonic sound-effects in randomly. Not as ear-offending as Iâ€™d feared, and certainly better thanâ€¦

â€¦1993â€™s Lemmings: SFX. Even when I was a (stupid) child I knew this was a poor effort. The lemmings’ high-pitched speech samples feature alongside a rather excitable male vocal artist who rattles off the lemmings’ various skills, occasionally informing the listener that theyâ€™d â€œBetter watch out, ‘cos thereâ€™s a lemming about.â€ #51 in the UK chart was as high as the green haired chaps managed to climb.

This rather nonsensical fad fortunately came to an end with 1994â€™s The World Warrior â€“ Street Fighter II. A mixture of the Street Fighter IIâ€™s title screen music, various sound effects and rapping, it eventually ends on a high with Kenâ€™s stage music. You canâ€™t deny that it made good use of the source material – music from the game plays throughout almost the whole track. That video above is just a fan made tribute, if you’re wondering. Unsurprisingly considering it only made #70 in the UK chart, itâ€™s the hardest to find a hard copy of out of all the music listed here.

Looking at the comments on YouTube itâ€™s obvious that these ditties did bring a lot of joy too many despite their tackiness. I think we should just be thankful that nobody made a track featuring Bubsy the Bobcat.