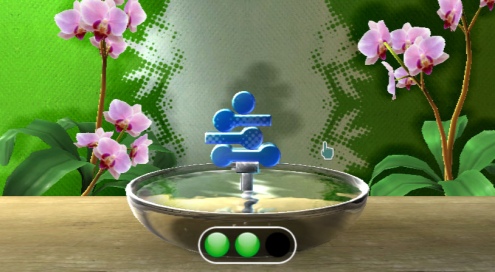 I was over a year late to the Art of Balance party, and for that I blame only Nintendo. Had they given the green light to WiiWare demos earlier – as they clearly and obviously should have – then I would have played the demo earlier, and realised how ridiculously brilliant it is earlier.

Actually, I blame Shin’en too, for giving the game an awful name. Awful because it sounds for all the world like a balance board game. But it isn’t: your task is to build a stack, using all the pieces you’re given, that doesn’t fall into the ever-threatening bowl of water below for at least a count of three.

It starts with nice simple geometric shapes, which fit together nicely with a steady hand. But, as these things inevitably do, it soon gets more complicated: pieces with curved corners or pointy bits; pieces that smash when other pieces are stacked on top; pieces becoming usable in an unhelpful order; less uniform bases for you to build on. There are challenge stages too: a time limit; a required height to achieve with your stack; or a floating, unstable base to build on.

There’s some really clever level design, and when repeated attempts are required – which they definitely are later in the game – it’s not always for the same reason. On more puzzling levels, the solution may only become clear after a bit of trial and error; some levels just takes practice, either to perfect the balancing act, or to do it quickly enough. It makes for a surprisingly varied game.

It has the hallmarks of a good physics-based puzzler: that delighted satisfaction that comes when a solution materialises from nowhere, and a desire to pursue more ‘interesting’ solutions, just because they’re fun.

Only twice, by my reckoning, does the game overstep the mark into frustration. Most of the time evil levels give the most satisfaction, but those two… still evil, even afterwards.

If, like me, Art of Balance passed you by when it was released over a year ago, then dust off your Wii and give it a go. DO IT.