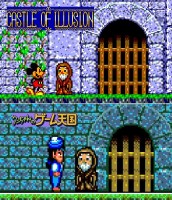 Kuni-Chan no Game Tengoku (Kuni-Chanâ€™s Game Paradise) has so much history buried deep within its After Eight-shaped cartridge that itâ€™s hard to know where to begin. The intro is a good place, I suppose – it’s set within the walls of Castle of Illusion, the very same place that Mickey Mouse visited. Donâ€™t believe me? Take a look at the comparison shots to the right.

Mickey doesnâ€™t feature, obviously, but other characters from Castle of Illusion are present. Mizrabel the witch resumes her role of being the baddie by stealing Kuni-Chanâ€™s dress during a bizarre cut-scene, which leads her to play mini-games against the first three bosses from Castle of Illusion – the walking tree, giant chocolate bar and sinister clown. The games vary depending on which door you enter inside the castle – the middle door involves playing the board game â€˜The Game of Lifeâ€™ (which the Japanese apparently love) while another is based around a Japanese card game.

Occasionally youâ€™ll get to play tennis or a variant of Columns too. These two may bear resemblance for some – theyâ€™re games also featured on Sega Game Pack 4 in 1, which was bundled with European GameGears from 1992 onwards. The sequel to Kuni-Chan no Game Tengoku features a racing game which is likewise present on Sega Game Pack 4 in 1, albeit with the sprites changed from go-karts to rally cars. 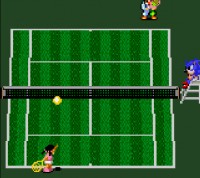 None of this information has raised your eyebrows so far? Well, here’s something to get your head around: this mini-game collection was also the first GameGear game to feature Sonic – as an umpire in the tennis game, no less – and not Sonic 1 as many may assume. I discovered this for myself by checking the Japanese release dates – Kuni-Chan no Game Tengoku was released on 22nd November 1991 while Sonic was released on 28th December 1991.

As Lloyd Grossman used to say on Through the Keyhole, letâ€™s look at the facts:

It’s games like this that make taking a chance on unheard of Japanese games listed on eBay worth the risk. We should also be grateful that the internet exists to share these findings – even the Sega magazines of the day overlooked this one.