As much as it pains us to say it, Nintendoâ€™s big 3DS launch game is just the flying level from Wii Sports Resort in a gloried form. If you have played Wii Sports Resort you will instantly remember the WuHu Island backdrop and if itâ€™s still fresh in your mind then you wonâ€™t find much new to explore here. Weâ€™re all for recycling, but this is the type of recycling we never want to see.

On the plus side there are some rather impressive 3D effects on display; this is easily the best showcase of the 3DS currently available. Like all the other Pilotwings games the controls are completely intuitive too, making it a breeze for just about anybody to pick up and play. 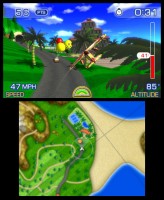 On offer are two game modes: Mission Mode and the slightly misleadingly titled Free Flight mode. Mission Mode lets you choose between three types of airborne vehicles – a hang glider, rocket belt and a plane which comes in different variants. The hang glider missions have a very relaxed vibe (the music here is an ambient remix of Pilotwings 64â€™s hang glider mission music) with tasks including having to take photos of certain buildings. These are then rated at the end of the mission and the best one automatically chosen.

When using a rocket belt you have to keep a beady eye on the fuel gauge. Manoeuvring takes a little bit of practice but soon youâ€™ll be thrusting away like James Bond. Giggidy. The plane missions meanwhile often include shooting targets with extra points awarded for getting a bulls-eye. One of the more memorable plane missions involves following a car while you fly overhead shooting the balloons that are slowly released into the air.

Free Flight mode, then. Despite the name youâ€™re initially given just two minutes to explore WuHu Island and collect orbs that give informational tidbits. There are also a few elusive items to find that unlock new goodies such as 3D dioramas of landmarks. 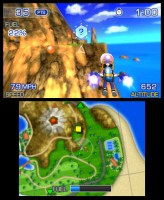 The Pilotwings series has always been good at showing off Nintendoâ€™s tech (the previous two were launch games for the SNES and N64) and this instalment follows suit. But whereas the original and its 64-bit brother took months to master this can be licked in a just a few hours. The scoring system is absurdly generous – I scored 85/125 on one mission but was still awarded 3/3 stars.

Shigeru Miyamoto once said that, â€œA delayed game is eventually good, a bad game is bad forever.â€ Although is isnâ€™t a bad game – as an introduction to the 3DS it more than serves that purpose – people are going to remember it as being incredibly short. And who likes feeling short changed? The last time we checked the answer was nobody.