Why they chose to use the Japanese names of each is beyond me – Sonic & Tails 2 was known as Sonic Triple Trouble outside of Japan, while Sonic Drift 2 became Sonic Drift Racing. Still, itâ€™s not a bad little line-up.

Sonic Triple Trouble is one of the best 2D Sonic games; not just on the GameGear, but in general. Dragon Crystal is very Rouge-like with a nice soundtrack. Itâ€™s bound to be panned by the press for being basic by todayâ€™s standards, but back in 1990 it was ace. Donâ€™t be fooled by Sonic Drift 2 – Mario Kart it isnâ€™t. The GG Shinobi has stood the test of time, and if Columns only costs a couple of quid – which is likely – then it should be an essential download if youâ€™re looking for something to play during lunch breaks.

Itâ€™s hard to see anybody but Sega re-releasing GameGear games on Virtual Console. Nonetheless, Iâ€™ve knocked up a list of ten titles Iâ€™d like to see.

Castle of Illusion Starring Mickey Mouse
A straight conversion of the Sega Master System version, but no less brilliant with some memorable bosses – including a giant chocolate bar – and the chance to go swimming in a giant cup of tea. The sequel – Land of Illusion – makes my head hurt due to the way the screen scrolls, but thankfully the rare and largely unknown Legend of Illusion corrected this. Legend of Illusion would be more than welcome on VC too.

Coca-Cola Kid
A Japanese-only platformer from Aspect – the developers behind most of the 8-bit Sonic games. It bears great resemblance to Sonic Chaos, in fact, with similar presentation and some recycled sound effects. The titular kid is rather acrobatic in nature and can also jump onto a skateboard to zoom through the levels quicker. A nice little game.

Tails Adventure
Miles better (pun intended) than Tailsâ€™ Sky Patrol – in which you can lose a life by crashing into trees, walls and other obstacles – this platformer is slower paced than the Sonic games and rather lovingly made. Visually it showed what the GameGear could do when tickled in the right places. Once Sega gets the Sonic games onto VC then chances are thisâ€™ll appear at some stage.

Gunstar Heroes
One of the most impressive GameGear games to be released; only the 3D FPS Faceball 2000 looks more impressive. Itâ€™s missing a few levels from the Mega Drive version and the sprites flicker badly but the charm still remains. As with Coca-Cola Kid, this was also a Japan-only release.

Mortal Kombat II
Potentially this could make it out if Warner Bros. could ever be arsed to do a deal with Sega. There are only two backdrops but it plays smoothly and itâ€™s better than Rageâ€™s GameGear version of Mortal Kombat 3, which is so bad itâ€™s almost unplayable.

Pac Attack
Combine Tetris with Pac-Man and you get Pac Attack. As well as forming lines you also have to line up ghosts for Pac-Man to eat whenever he appears. Even though it was available as part of a Pac-Man compilation on Game Boy Advance itâ€™s something of a forgotten gem. 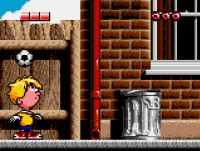 Marko’s Magic Football
If you ever saw this in action youâ€™d think that itâ€™s a Mega Drive game. The sprites are large and well animated and Marko has dozens of football-related tricks up his sleeves. And Marko is way cooler than Soccer Kid – who had a face only a mother could love.

Power Strike II (aka GG Aleste 2)
An awesome and impressive 2D shooter thatâ€™s uncommon on eBay and moves like greased lightening. With no R-Type games on GameGear this is the best example of the genre, with busy backgrounds, varied levels and a bonus stage viewed from a third person perspective.

Prince of Persia
Much like Mortal Kombat, this could appear too if Ubisoft had a chat with Sega. Theyâ€™re probably too busy kissing Nintendo though. Prince of Persia, much like the early Sonic and Mario games, plays just as well now as it did when it was first released. The animation was jaw-dropping back in the day.

Ristar
An underrated platformer which plays a lot like the original Rayman. The Japanese version has an extra level which was removed from the US and European versions on the grounds that it was deemed too tough. Itâ€™s still present on these versions but you have to play it on a Japanese system to get it to appear.

Iâ€™ve left Wonderboy off the list as Iâ€™m willing to bet my last Wagon Wheel that itâ€™ll be included in the second batch of games. Other likely candidates? Streets of Rage, Virtua Fighter Animation, Ax Battler and no doubt Sonic 2, a game which I can’t really stand. At all.