So, you’re out and about walking around town with your Nintendo 3DS tucked in your pocket in sleep mode. You get home and, hey presto, a flashing light is emitting from the 3DS. No, not the small amber flashing light – thatâ€™s to indicate wireless. The light weâ€™re talking about is a very special one. And itâ€™s the colour of the food you find up your nose. 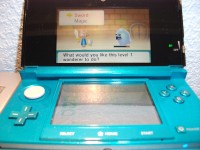 Thatâ€™s right, baby, itâ€™s green and it means you’ve had a StreetPass. StreetPass is not some kind of new sport involving playing rugby in the high street – itâ€™s an innovative feature built into the 3DS’s glorious innards. Once StreetPass is enabled and the 3DS is put it to sleep mode if you happen to walk past other 3DS owners youâ€™ll find a new face in the StreetPass Mii Plaza.

I decided to take my 3DS out and about whilst working this week in Manchester and found a grand total of 12 people whoring out there Miis on StreetPass. The coolest of these was an individual named ‘PooBoy’ who had a dream to be a wizard. Takes all sorts, eh?

You can also use your new friends to play the basic but fun turn-based RPG found in the Mii Plaza entitled StreetPass Quest. If you live in a backwards area where nobody else owns a 3DS then worry not as you can exchange footsteps – gained by simply walking around with the handheld – for coins and hire a hero to help in your quest. If youâ€™ve selected cat as your favourite pet youâ€™ll get a sword-carrying moggy to help; if youâ€™ve selected dog youâ€™ll get a canine critter. Your favourite colour also denotes the colour of your magic attacks. Rewards for beating the bad guys – which start off with King Boo-alike ghosts – include new hats for your Mii to wear.

If anybody has come across a better named person than PooBoy while out Mii-hunting then let me know; Iâ€™d be interested to know what could possibly top that…