Every month we trawl eBayâ€™s completed listings to find stuff of interest that has sold for vast sums. Why? Because it feels so good.

With the 3DS now in the back pockets* of thousands, if not millions of gamers I thought it would be a fine idea to search for other items offering the chance to experience the third dimension.

Segaâ€™s 3D glasses for the Master System have always been popular; hereâ€™s a set that ended at Â£58.17 with 8 bids. The games that go with it usually fetch a nice price too – a copy of Out Run 3D ended at Â£46 after 10 bids, another went for Â£41.95 with 11 bids, while a copy of Space Harrier 3D sold for Â£30.91 with 10 bids. Itâ€™s a little known fact that the 3D glasses only worked with the original Master System, as they had to be connected via the card port.

Even less well known is that the Famicom (NES) had a pair of 3D specs too, which were compatible with a handful of titles such as Rad Racer and the brilliantly named Animal Attack School. A brand new pair of those sold for Â£69.99 on a Buy It Now. A second-hand set went for Â£93.24 but that included all six games released for it and a Hori joypad.

In the world of 2D, a copy of the uber rare Darxide on 32X sold for Â£975 via Best Offer. The seller originally wanted Â£1,200 for it, if memory serves (I was watching it on eBay for a while). Playing like a 3D version of Asteroids, Darxide is not only a pretty good game but has some heritage behind it – it was developed by Elite creator David Braben. Its rarity stems from the fact that it was one of the last Sega 32X games, released at a time when both retailers and the gaming public had lost all faith in the system. You can read a little bit more about it on the Frontier website.

Sealed game collecting is becoming quite a big deal. Proof? Even rubbish games can sell for a small fortune if theyâ€™re sealed, like this copy of Conan on GameCube which went for Â£56 after 9 bids, purely because the contents hadnâ€™t been touched by human hands. Less rubbish, so much so that it isnâ€™t rubbish at all, is this sealed copy of Fire Emblem on Game Boy Advance which went for Â£26.55 after 7 bids. 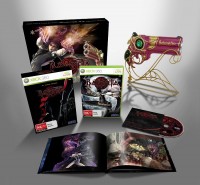 Outside of the realms of retro, a Bioshock Collectorâ€™s Edition – which included a Big Daddy figurine – went for Â£109, while a Bayonetta Climax Edition with a replica gun sold for Â£75.

Last month I reported that Tales of Vesperia on Xbox 360 has been increasing in value. With another month gone, the price continues to increase – one copy sold for Â£70, another for Â£60 and dozens for Â£40-Â£60. Namco should consider issuing a re-print.

*The 3DS manual says not to put it in your back pocket. So don’t.