The Nintendo 3DS is released in the UK today. Being at the cutting edge of games journalism, we can bring you a complete look at Nintendo’s first 3D hardware. That is to say: the Virtual Boy. Not the 3DS.

Back in 1995 Nintendo went head first – no pun intended – into the world of virtual reality, despite claims that Atariâ€™s prototype Jaguar VR headsets (and the Sega VR add-on) were giving testers motion sickness and headaches. 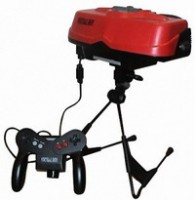 As predicted by many videogame journalists back in the day, it was a move that didnâ€™t pay off. Indeed, GamePro infamously reported that they had more fun playing with the bubble wrap the console came packed in rather than the Virtual Boy itself.

Designed by the late Gunpei Yokoi, the machine launched in Japan in July 1995, and August 1995 in North America for $180. It ran off six AA batteries that lasted for around an impressive 7 hours, and was bundled with the reasonably enjoyable Mario Tennis. A red screen was chosen because red LEDs drain less battery power than any other colour. That, fact fans, is why standby lights on household appliances are always red. The joypad bore resemblance to the GameCube controller, featuring not one but two d-pads. As per all Nintendo joypads – the palm denting NES controller aside – it was comfortable to use and hold.

Although the machine had a 32-bit processor and was capable of producing 3D visuals, the Virtual Boyâ€™s forte was to create an illusion of depth through rotating mirrors inside the headset. In Wario Land for instance, the portly doppelganger could jump out of the background and foreground to avoid swinging blades and such, whilst in 2D shooter Virtual Force the craft could move up and down to different planes to avoid enemies.

Only 33 games were released in total â€“ 14 in the US and 19 in Japan. Many more, including GoldenEye 007, Donkey Kong Country 2 and VB Mario Land were in development but were swiftly canned. Figures suggest that there were 770,000 consoles sold in total, with only 140,000 of those in Nintendoâ€™s home country.

Within a year Nintendo pulled the plug and had cancelled the proposed European launch. A lack of decent titles, the imminent release of the PlayStation, Saturn and Nintendo 64 itself, known then as Ultra 64, all added up to the machineâ€™s demise. There was also fact that you were susceptible to having â€˜kick meâ€™ signs stuck on your back while playing.

Due to its quirkiness â€“ plus the fact that it was made by Nintendo â€“ the machine has managed to sell for a steady price on the second hand market. Itâ€™s also quite easy to get hold of original sealed copies of games: the machine was such a flop that many stores were left with countless unsold games eventually flogged for next to nothing. Some of the final releases can go for hundreds on a good day, while obscure Japanese release Virtual Lab is sought after due to the misspelling of Nintendo – ‘Ninntenndo’ is written not just on the back of the box but also on the cartridge itself.

With the 3DS now upon us there is a chance that weâ€™ll get to experience the systemâ€™s finer software via the handheld’s Virtual Console service. Nintendo arenâ€™t totally oblivious to the systemâ€™s existence after all – Wario Ware Inc: Mega Microgame$ featured a mini-game based on Mario Clash, while the recent Donkey Kong Country Returns was going to have a red-hued Virtual Boy-style level.

And yes, we have named this feature after a Hugh Grant film. Sorry about that.