Being the mere human that I am, curiosity runs through my veins. Bootleg multi-game carts just so happen to be something that gets my curiosity glands flowing – thereâ€™s joy to be had from coming across one of these mystical beasts, plugging it in, and seeing what treasures it contains. If youâ€™re currently scratching your head, allow me to fill in the blanks – multi-game carts are cartridges often manufactured in places like Hong Kong, Taiwan and Cornwall and contain copious amounts of pirated software. 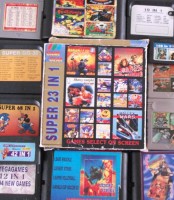 When it comes to making a purchase you never know what youâ€™re going to get. Some promise 50-odd games but only actually contain a few games cheekily repeated with different names. My worst offender is a Mega Drive cartridge promising 500 titles but the genuine amount is just 5. This means that some poor soul had to think up of 495 alternative names for the 5 games it included – Rambo III, Tiny Toons, The Flintstones, Sunset Riders and World Cup 92, if youâ€™re wondering.

Others live up to their promise of featuring whatever number is printed on the label, albeit the bootleggers have chosen older games that are small in memory size so they can be crammed into the innards of a cheaply manufactured cartridge. The artwork on the cartridge label can never be taken as gospel either – some mention or feature artwork from games that are nowhere to be found. One Game Boy Advance cartridge I own has boxart from Yoshiâ€™s Island, Gladius and Power Rangers but doesnâ€™t contain any of them.

Game Boy Advance multi-carts in particular are brilliant finds for retro fanatics – they usually contain a couple of Game Boy Advance games and a lengthy list of NES and Famicom titles. This amuses me greatly – when Nintendo released the NES Classics range they charged Â£15 for a single NES game on a Game Boy Advance cartridge.

Sega GameGear multi-carts are interesting too – most have a handful of GameGear games plus Japanese SG-1000/Sega Mark III (aka Master System) games such as Transbot, Teddy Boy and My Hero. One of my GameGear carts has a reset switch on the cartridge itself which helps battery consumption as you donâ€™t have to keep power cycling the handheld to choose games. Another GameGear multi-cart features shoddy versions of Super Mario Bros. and Dr. Mario – known as Super Boy 2 and Dr. Hello.

For collectors multi-carts are highly desirable, especially those that come with boxes. And with new variants always being discovered – it’s impossible to tell how many of these things were made – thereâ€™s always something to keep your eye out for on the likes of eBay.

NB: Games Asylum does not condone piracy of any kind. We didnâ€™t even like the fact that thereâ€™s going to be a fourth Pirates of the Caribbean movie.