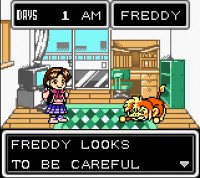 Animal rights organisation PETA has been around since 1980 and occasionally backlash against videogames which feature animal harming for entertainment. Super Meat Boy and Cooking Mama are two titles that have recently rattled their cageâ€¦ pun fully intended. Itâ€™s odd, then, that Taitoâ€™s Monkey Puncher managed to escape their attention because, as the incredibly stupendous title suggests, itâ€™s a simian boxing sim.

The plot is both silly and simple – mysterious gangsters known as the â€˜Saru Groupâ€™ have been kidnapping monkey trainers with the assistance of mind control. After their father goes missing, Kenta and Sumire (the two playable characters) decide to raise a monkey fighter of their own in order to find his whereabouts. 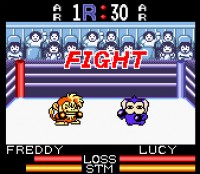 Best described as a mixture of Pokemon and a generic virtual pet, your chosen chimp has to be kept happy and well fed, while playing the training mini-games will improve its strength and stamina. Every now and then an invite for a monkey punching match appears, which can be accepted or declined. These matches take place in boxing rings where sadly interaction is only limited to hammering the A button to help your monkey back on their feet. When loosing a match, the trainer yells â€œYou ass as you!â€ while at the end of each day he or she says â€œTomorrow I’ll also work hard!â€ The translation may be garbled, but it does add a degree of charm to the proceedings. 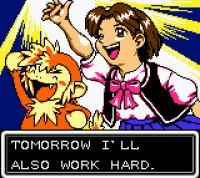 Before having to fight for his life, your primate pal has to be tamed by giving him food and calling its name via the menus. Once disciplined the fun starts – you can send the critter on shopping errands and praise or â€œrebukeâ€ its random purchases, send it on dates with other monkeys in hope of being able to breed a super monkey, or take it training. Training stages are pleasingly simple – pick a subject (sit-ups, punch-bag, jogging, etc) and then press the A button in good timing to get a chain going.

Itâ€™s a very basic game at heart – it mostly boils down to selecting options from menus – but itâ€™s also curiously addictive and as cute as a button. Itâ€™s just a shame that copies are hard to come by – European publisher Event vanished off the scene as quickly as they arrived.