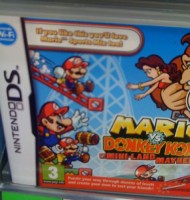 I think Nintendo of Europeâ€™s marketing has taken a tumble recently. First there were those ridiculous adverts with Jedward; now theyâ€™re making wild accusations as to which games we would “love”.

According to the display boxes of Mario Vs Donkey Kong on DS, if you like the hybrid of puzzle and platforming action it contains, youâ€™ll also love Mario Sports Mix on Wii.

Itâ€™s a bit of a stupid claim to make: theyâ€™re not even of the same genre, let alone on the same console. The only connection is that they both feature a certain plumber.

Itâ€™s a bit like EA putting â€œIf you like Dead Space 2, youâ€™ll love Tiger Woodsâ€ on copies of their space-based shooter.

One good thing came out of this though – after uploading the photo above onto Twitter our loyal followers came up with their own ‘if you like X you’ll love Y’ jokes. Here are a few of the best: