The rumour mill has been churning for the last few weeks, with talk of the PSP2 being as powerful as a PlayStation 3 and launching with a Virtual Jeremy Clarkson game. Now the day and hour has come – 3PM January 27th 2011, Japanese time – and Sony are unveiling the next portable PlayStation to the world. They don’t call it the PSP2 – they now call it the Next Generation Portable or NGP.

Whilst the NGP looks much like the original PSP, it now has two analogue sticks and a high resolution 960×544 pixel 5-inch OLED screen. Aside from the looks though, it packs a bunch of new features – a touch sensitive backside, 3G data connectivity (and WiFi obviously), GPS, motion sensors, front and rear cameras, a quad-core ARM Cortex-A9 CPU (for comparison, the iPad packs a single-core Cortex-A8) and a quad-core PowerVR SGX543 GPU (it’s speculated that the iPad 2 and iPhone 5 will sport a dual-core version of the same SGX543 GPU).

Gone are the PSP’s UMD discs, replaced with flash cards that seem a lot like SD cards. Online connectivity is one of the big selling points – with downloadable games on the PlayStation Store, rankings, achievements, location-based services, and all that jazz. Among the first games shown were Killzone, Uncharted, Little Big Planet, Wipeout, Metal Gear Solid 4, Call of Duty, and a whole bunch of titles which look to be roughly PS3 quality (the system doesn’t have to be as powerful as a PS3 to output similar graphics on to a lower resolution screen). 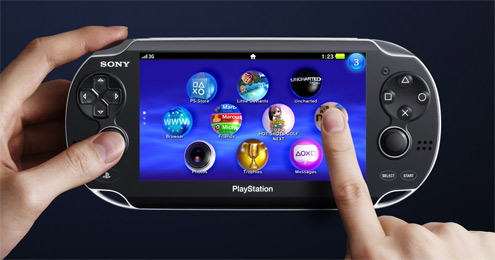 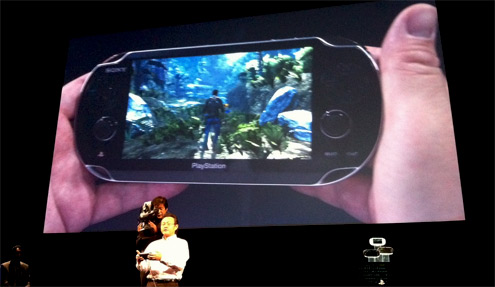 Sony say it will release this holiday season, so Christmas 2011 then. It all looks very nice so far, and very much in the same style as the original PSP and a lot of the predictions. We’re still awaiting the pricing.