It made me smile when websites started speculating that the Kinect could end up being another Sega 32X. This is because similarities between them are vast – the Sega 32X also promised a new gameplay experience, bolted onto an already existing console, required software especially developed for it and was designed to extend the life of its host. With 8 million Kinects sold so far it’s fair to say that Microsoft’s motion detecting device hasn’t been another 32X. But although the 32X did damage Sega’s reputation, it’s still far from being the worst thing ever to be released. 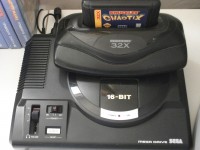 Let’s start with how the Sega 32X came to be. Back in 1994 the 3DO and Atari Jaguar were gaining a lot of attention, especially from the hyperbole filled gaming magazines around at the time, and with the Sega Saturn still a year away Sega wanted something to put the spotlight back on the Mega Drive. Sega of America were in charge of designing the add-on which was allegedly sketched out on a hotel notebook within the space of an evening. Under the mushroom shaped plastic it housed two SH-2 32-bit RISC processors – the very same that the Sega Saturn would be packing. This turned out to be something of a mistake as Sega ended up fighting with themselves over parts.

As mentioned, gaming magazines were much more enthusiastic in the 90s then they are now, which is something that clearly fuelled hype for the system. It’s not particularly common knowledge that upon launch in November 1994 the system sold out in both America and Europe with stock short on the ground for months afterward. The three launch games – Star Wars Arcade, Virtua Racing Deluxe and Doom – were far all from far perfect but still pretty good, and Sega promised that many more games were on their way.

It wasn’t until a few months after launch – when the promised slew of titles turned out to be actually more of a trickle – that things started to look bleak for the add-on. Not so much in the US but Sega of Europe really gave European 32X owners a hard time and I think this is where so much negativity for the system stems from. Not only did it cost £170 (which was £70 more than it cost in the US) but new releases were few and far between and many 32X titles didn’t make it out of the US including BC Racers, Blackthorne, Pitfall, Star Trek and quirky platformer Tempo.

Europe did receive two exclusive titles though – FIFA 96 and David Braben’s DarXide, which was being primed to release alongside the Neptune – a combined Mega Drive and 32X. Japan also received an exclusive title in the form of Romance of the Three Kingdoms IV: Wall of Fire.

When it comes to collecting 32X stuff USA is the way to go. PAL games are expensive – even the common ones will set you back around £10 each – while the more desirable titles such as Knuckles: Choatix and Kolibri (a humming bird-based shooter from the developers behind Ecco the Dolphin) usually sell for £50-£100. This, however, is cheap compared to what a copy of Darxide or Primal Rage will cost. The PAL version of Primal Rage is so rare that it wasn’t known to exist until a few years ago. Generally most US 32X costs under £10, with the exception of Spider-Man: Web of Fire which was the last US release and will set a collector back around £150. A 32X systemshould only set you back around £30, but when purchasing it’s a good idea to make sure it has all the cables with it otherwise these will set you back another tenner each on eBay.

Fortunately it’s easy to play US games on a PAL Mega Drive. The 32X simply acts as a slave device and goes by what region a Mega Drive is set to, so all you need to have a region-free 32X is to have a modded Mega Drive. Many websites offer this service, such as ConsolePassion, or if you’re a dab hand with a soldering iron then you can always mod it yourself. A US 32X works fine with a UK Mega Drive II PSU so there’s no need for a step-down converter either.

It’s a usually said that the 32X has very few decent games. If you only take the PAL line-up into account then this is true, but with the larger US catalogue in mind I think it’s an unfair thing to say. It had the best home versions of NBA Jam, Mortal Kombat II, Pitfall and Blackthorne while games like Metal Head and Shadow Squadron looked better than some of the early Sega Saturn titles. Shadow Squadron was in fact converted to Sega Saturn. The Rayman-alike Tempo was a joy to play, Virtua Fighter was an impressive conversion that was better than the Saturn version due to having no loading times and although rather ancient the conversion of Afterburner and Space Harrier were the best around until Sega released Sega Ages on Saturn. Combine this little lot with Knuckles: Choatix and Kolibri – often touted as the two reasons to own the system – and I think you’ll agree that the 32X isn’t quite the harbinger of death that most make it out to be.