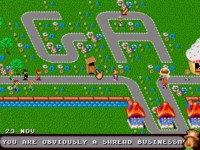 When Bullfrog started developing Theme Park for the Amiga and PC I doubt that even in their wildest collective dreams would the game end up on the humble Mega Drive. But EA gets what EA wants, and conversions for both Mega Drive and SNES arrived in 1995. Bullfrog should have just been grateful that EA didnâ€™t want a GameBoy version.

The end result turned out pretty good – itâ€™s better than the non-AGA Amiga version (in which all the shops are dull wooden huts) but not as good as versions released on more power systems. Here for instance thereâ€™s only one entertainer – a clown that juggles – but in the PC version a whole host of poor sweaty souls in costumes can be hired.

Navigating the menus does take a little while to master – I still struggle to find the option to delete buildings even though Iâ€™ve clocked countless hours playing it – but after half an hour or so you should get the hang of things. There are allsorts of options to play around with too, like adding extra caffeine in the coffee so that people go whizzing around the park. The odds of winning the sideshows, like coconut toss and hook-a-duck, can also be changed.

The music is both good and bad. Good, because it ingeniously changes on the fly depending on what ride is on the screen. Bad, because these music samples only play on a 10-second loop so they soon become tedious to listen to. Visuals fair better – itâ€™s bright and colourful, and the Mega Drive copes well even when your park is packed full of visitors. 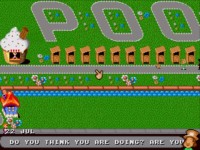 Playing the game properly is all well and fine, but fun can also be had by using your imagination. I once opened a park full of nothing but toilets with a stupidly high ticket price just to see if any visitors came. Itâ€™s also possible to make roller coasters with dangerous bends that send your customers flying through the air. Whee!