Metacriticâ€™s worst 10 games of 2010 has worked out pretty evenly between formats – there are a couple of Kinect titles, a few multi-format jobbies and one each on the list for PlayStation Move, WiiWare and PSN. As you may have predicted, a few of these are movie tie-ins. Some things never change.

Did you play any of the stinkers below? Or were you even stupid enough buy any? If the answer is yes to either (or both) then you have our pity. If you purchased any more than two on the list though, then you donâ€™t get our pity at all – youâ€™re a bloody idiot that should read sites like Metracritic and GameRankings more.

For the purposes of review Harry Potter and the Deathly Hallows (EA, 38%) is one that I played all the way through to the end. I always thought that the Harry Potter games were getting better over the years, but this one is the worst of the bunch. Yes – even worse than Quiddich World Cup. Around half of the missions take place in small arenas where Harry simply has to defend himself for 10 minutes or so. If thatâ€™s not a sign that the developers couldnâ€™t be bothered with it, then I donâ€™t know what is.

EA are also responsible for #9 on Metacriticâ€™s list – the download only Dead Space Ignition (EA, 38%). Just by looking at the laughably poor artwork you can tell that this was a rushed out to drum up some extra press coverage for Dead Space 2. â€œWhen your game makes you want to skip the egregiously tedious gameplay so you can see what happens in the utterly forgettable story, you know you’re doing something wrongâ€, said Cheat Code Central.

Pure Football (Ubisoft, 38%), or Pure Futbol as itâ€™s known in some parts of the world, slides in at #7. Ubisoft must be pretty ashamed of this one as even though it was only released in May, the official website has already been taken down. See?

With a lead character that looks like he could be part of the Gears of War trilogy, Iâ€™m sure that Quantum Theory (Tecmo, 37%) was purchased by a few misguided souls. A quote from Destructoidâ€™s review sums it up nicely: Quantum Theory is what would happen if Gears of War and Super Mario Bros. had a baby. A mewling, deformed, horrific baby that doctors would try to drown.â€

We now have our first game on the list that requires you to wave your limbs around to play – Sonyâ€™s Kung Fu Rider (37%, SCEA). Despite a quirky premises, many reviewers suggested it would have worked better with a joypad rather than the PlayStation Move. Oh, Sony!

The 5th game on the list is a curious one – Power Gig: Rise of the SixString (34%, Seven45 Studios) was only released in the US and it came with a real guitar. Thatâ€™s â€˜realâ€™ as in it had strings, unlike the Rock Band and Guitar Hero guitars. Because it was so cheaply made though the sound it made when being played was rather painful on the ears.

You can tell PlayStation-exclusive Kick Ass (33%, WHA Entertainment) was a rush-job as they recently released a patch that included all the stuff they wanted the game to feature when it was first released. Most reviewers found it to be frustrating and repetitive, with a high price point that didnâ€™t help matters either. Kick Ass? More like Stinks of Ass.

The 3th worst game of the year is the Kinect-only Fighters Uncaged (32%, Ubisoft), but believe it or not thereâ€™s another Kinect game out there that scored worse than this shoddy brawler and thatâ€™s Deca Sports Freedom (27%, Hudson Entertainment). The only good thing that Games Radar could say about it is that â€œYou might be able to trade it inâ€. 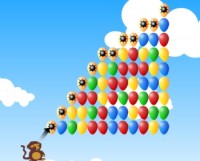 And so weâ€™re left with the worst game of the year. What could be worse than the assortment of titles above? The answer is Bloons for WiiWare. â€œBloons is an exciting puzzle game based on the simple fact that popping balloons is fun,â€ says the developer. That may be so, but only if the controls worked. Which they didnâ€™t. There are a couple of other WiiWare titles low down on Metacriticâ€™s list too – namely, Kung Fu Funk: Everybody is Kung Fu Fighting! and 5 Arcade Gems – suggesting that itâ€™s certainly a good thing that Nintendo has now allows demos of WiiWare games.