When was Dead Rising 2 originally due to be released? I pre-ordered my copy a good six months ago and recall it knocking around on release lists months before that. It canâ€™t be too far off from being finished now, as Capcom have revealed two different special edition packs. 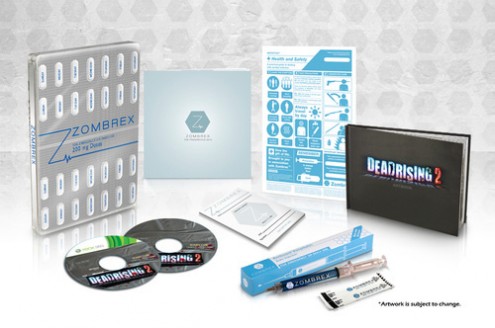 The pack above is for North America only and includes a two-disc steelbook case, a Zombrex syringe pen, prescription notepad, prospectus sales brochure, safety card and a 48-page hardback Dead Rising 2 art book. The PlayStation 3 version comes with a Blu-Ray disc featuring a high definition making-of movie and with a voucher for a downloadable XMB theme. Xbox 360 owners meanwhile with get the same making-of movie on DVD, plus an 83-minute Zombrex Dead Rising Sun movie which is directed by Mega-Man creator Keiji Inafune. 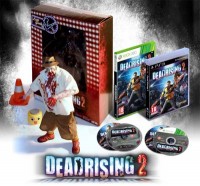 The European SE pack is slightly less exciting, containing only a zombie action figure (with two accessories – a Servbot head and a traffic cone) and a bonus disk which presumably contains the aforementioned making-of. I searched on all the big name online retailers but couldnâ€™t find anybody offering it to pre-order yet.

If it arrives at retail for any less than Â£49.99 though, I’ll eat my own brain.