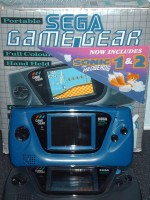 If youâ€™re a follower of our Twitter feed then you may be aware that Iâ€™ve been collecting Sega GameGear stuff since the start of the year. After having been lucky enough to bag a few large bundles on eBay relatively cheaply, Iâ€™m not far off from having a complete collection of PAL releases.

Why the GameGear, you ask? Well, the handheld holds a lot of nostalgia for me – Iâ€™ve owned one since around 1994, when games for it were still being released. I also believe that itâ€™s the most under-appreciated system ever with a huge catalogue of decent titles, many of which are largely unheard of.

Because the GameGear didnâ€™t sell as well as Nintendoâ€™s GameBoy many people see the system as another one of Segaâ€™s failed attempts. Not so – eight million of the 8-bit handhelds were sold during its six year lifespan. When you bear in mind that the GameBoy Advance was around only for five years it can hardly be deemed a flop. 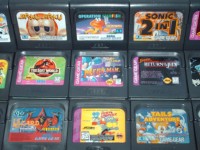 The majority of people also think of the GameGear as nothing more than a portable Master System. This isnâ€™t a lie as such – for the first couple of years of the handheldâ€™s existence most of the software for it was simple Master System conversions – but once the Master System started to fizzle out many developers started converting their Mega Drive games to it, often with decent results. The 8-bit versions of the likes of Earthworm Jim, Super Return of the Jedi, James Pond 3, Ristar, Dynamite Headdy, Gunstar Heroes and Jungle Strike remained just as playable even though scaled down slightly.

While building up my collection I soon became fascinated with finding out what titles were denied European releases. The amount of games that were US and Japan only is staggering. Iâ€™m not just talking about obscure RPGs like Lunar and Shining Force but games based on established brands and characters like Pac-Man, Greendog: The Beached Surfer Dude, Coca-Cola Kid, Tailsâ€™ Sky Patrol and the aforementioned conversions of Jungle Strike and Gunstar Heroes. On the upside though, Europe had a fair few exclusive releases including Mortal Kombat 3. Games were released right up until 1996, which is a whole year after the Sega Saturn and PlayStation was released.

A round up of definitive titles for the system seems like a good idea for this tribute, but rather than state the likes of Columns, Sonic 1 and Wonder Boy – which any gamer worth their salt would have heard of or played before – Iâ€™m going to provide an alternative selection of titles.

Power Strike 2 (aka GG Aleste II)
A stunning 2D shoot â€˜em up that moves like greased lightening. The PAL version is something of a â€˜holy grailâ€™ for collectors but fortunately the Japanese version is easy to find.

Sonic Triple Trouble
Not only is this the best 8-bit Sonic game, itâ€™s also one of the best 2D Sonic games full stop. The level design is excellent, the music captivating and the bosses innovative. It improves on Sonic Chaos in every way.

Baku Baku
This is a good conversion of the under loved Saturn puzzler, featuring similar rendered visuals. Better than Columns? It certainly has more monkeys.

Super Return of the Jedi
A conversion of the SNES platformer thatâ€™s both slick and polished. Back in 1995 this was EGM’s handheld game of the year. 1995, lest you forget, was also the year Pokemon was released on GameBoy.

Gunstar Heroes
A couple of levels are missing from the Mega Drive version and the sprites suffer from flickering but it’s still a technical showcase for the handheld. Even some of the special effects used on some of the bosses have been pulled off here.

Outrun
I think that if you’ve played one 8-bit racing game then you’ve played them all as they all use the same scrolling road effect. Outrun has an edge over the others because of the excellent music and the way the backdrops seamlessly change.

The Excellent Dizzy Collection
Each of the three games included here – Dizzy the Adventurer, Panic Dizzy and the previously unreleased Go! Dizzy Go! – are pretty good. The presentation is impressive too, particularly the speech samples.

Coca-Cola Kid
A Japan-only release. This platformer doesn’t play like Mario or Sonic; more like Strider with the main character being surprisingly acrobatic. Must be down to a high caffeine intake…

Legend of Illusion staring Mickey Mouse
The third and final part of the Illusion series. Nice music, large sprites and entertaining boss battles. Mickey gets new weapons and skills as the story progresses while one of the later levels has an impressive 3D effect in the background.

Mega Man
Nothing to do with Capcom, this. It’s by US Gold. They took all the best parts out of the NES versions and compiled them into one game. Sadly only released in the US. 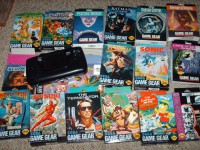 There arenâ€™t many consoles that get given a second chance years after theyâ€™ve been discontinued, but the good old GameGear managed to get just that. In 2001 Majesco re-released the GameGear and a handful of games. The re-released system is the definitive one to own – the screen is brighter and clearer while the battery life is slightly longer lasting. There are three ways to identify a re-release from the original – the power button is black and not orange, the plastic of the handheld itself is a darker shade of black and the GameGear logo on the side of the screen is monochrome. The Majesco systems are a bugger to find on eBay as many sellers are unaware of what they are – the one I have was listed as â€œan original Sega GameGearâ€ but luckily the photo on the auction was clear enough for me to spot that it wasnâ€™t. The re-released games included Sonic Chaos, Sonic Spinball, Pac-Man and a handful of Disney licensed games. All of these turn up on eBay often, usually still boxed and sealed.

If you’re looking for a way to prevent idle thumbs before the Nintendo 3DS arrives, you could do a lot worse than finding a cheap GameGear on eBay. You might even discover that 2D is the new 3D!