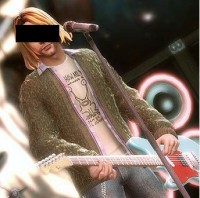 Kurt Cobain would have hated Guitar Hero and even before Courtney Love complained about the inappropriate use off his personality in Guitar Hero 5, I knew it would cause an uproar. Apparently No Doubt and Jon Bon Jovi werenâ€™t happy about the way that they were portrayed either, so Activision has decided that there will be no playable celebrity characters in Guitar Hero 6. Gene Simmons will still be narrating the game though.

Iâ€™m a little miffed – the playable virtual rock stars of Guitar Hero 5 did add a certain something to the game, and also showed how far the series has come since the first two Guitar Hero games. Maybe Activision should just show any musicians how their character models will be used, etc, before getting them to sign a contact? Or just go for musicians that donâ€™t give a hoot how their character is used, like The Bloodhound Gang?